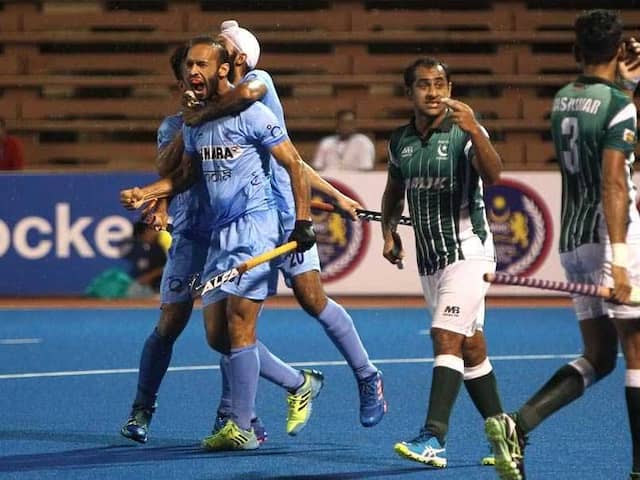 Three goals in the last ten minutes helped India thrash Pakistan 4-0 in the Champions Trophy opener at Breda, Holland. Ramandeep Singh started of the proceedings for India, giving team the initial lead in the 25th minute with a clever defected strike.  After Ramandeep’s opener both teams struggled to find the net in the second and third quarter. Dilpreet Singh provided India with a second goal in the 54th minute. Pakistan in an attempt to score, removed their goalkeeper and brought on an attacking player. The plan backfired for as an open Mandeep Singh’s sliding deflection earned India their third goal. Just before the final whistle Lalit’s strike in the 59th minute added glitter to the scoreline for India in the Champions Trophy opener.

Highlights Of Hockey Match Between India vs Pakistan, Champions Trophy 2018 at Breda, Holland

19:15 IST: Thank you for joining us during our live coverage of India vs Pakistan Champions Trophy opener. Its good-bye from us for now.

19:00 IST: Full Time whistle and GOAL! Lalit finishes off in style for India. Just before the final hooter. Lalit flicks the ball into the net. India thump Pakistan 4-0 in their opening match of the Champions Trophy 2018.

18:57 IST: Brilliant tackle from Chinglensana Singh. He appears out of no where to save it for India. India 3-0 Pakistan

18:56 IST: 57th minute! GOAL! Mandeep gets the third goal for India. India on verge of a victory now. India 3-0 Pakistan

57' GOAL! @mandeepsingh995 makes no mistake in sliding the ball into an empty goal to finish off a co-ordinated counter-attack by India.

18:52 IST: GOAL! What a finish from Dilpreet. Placed it to perfection. India 2-0 Pakistan

18:49 IST: Brilliant tackle from Tasawar. Saves a goal for his team.

18:44 IST: Indians on the charge now! Brilliant passing from Harmanpreet Singh and Sardar Singh but Pakistan defenders deny them a goal.

18:38 IST: Ferocious drag-flick but Amit comes to the rescue for India. India 1-0 Pakistan

18:35 IST: India dominating the game with majority ball possession. Just under 4 minutes to go in the 3rd quarter. India 1-0 Pakistan

18:33 IST: Great long pass into the circle but Mandeep Singh loses the ball. India really in an attacking mode now, trying to extend their lead.

18:11 IST: Hooter goes up again! 2 quarters are done and  dusted. Ramandeep Singh's goal is the only difference between both the teams. India 1-0 Pakistan

18:08 IST: Pakistan now moving a little quicker inside the Indian circle but are just not getting the breakthrough. India 1-0 Pakistan

18:06 IST: GOAL! Ramandeep Singh with a brilliant deflection and India open their account against Pakistan. India 1-0 Pakistan. Just under 5 minutes to go for second quarter.

25' GOAL! @ramandeep_31 gracefully guides Simranjeet's sideways shot into the goal for India's first of the tournament and this game!

18:01 IST: Pakistan attacking more from the right side of the pitch but are getting blocked by Indian defenders.

18:01 IST: Ajaz with a brilliant run but Sardar Singh comes to the rescue. Both teams still goalless.

17:59 IST: Good work by Dilpreet Singh inside Pakistan's half but India MISSES again.

17:53 IST: Hooter goes up!  First quarter is over. Both teams still goalless but it has been a really exciting match so far.

17:48 IST: Five minutes to go in the first quarter. Both teams still searching for their first goal.

17:41 IST: Pakistan under pressure here. Brilliant mid-field passing from the men in blue.

17:33 IST: Both teams are at the center. Players have lined-up alongside match officials for the national anthems.

Here are the 11 players of the Indian Men's Hockey Team who will begin their campaign at the Rabobank Men's Hockey Champions Trophy Breda 2018 in the Netherlands on 23rd June 2018 in the opening match against Pakistan. #IndiaKaGame #HCT2018 #INDvPAK pic.twitter.com/gn7H4PIyAn

16:50 IST: Fact: The last encounter between the two teams was during the XXI Commonwealth Games 2018 where Pakistan held India to a draw.

16:45 IST: We are just 45 minutes away from the blockbuster opening encounter of the tournament.

Today's first match will be: IND v PAK Rabobank #HCT2018
Are you ready to watch them compete?
https://t.co/q5Vggh5Q5W@TheHockeyIndia @hockeypakistan pic.twitter.com/vcp1qxTFge

16:30 IST: Hello and Welcome to the live updates of the Champions Trophy match between India and arch-rivals Pakistan.

Over the past year, India had enjoyed convincing victories over their nemesis right from the Asian Champions Trophy in 2016 when they had beaten Pakistan in the final. This was followed by a double victory in the Hockey World League semi-final in London 2017 and the Asia Cup in Dhaka where India lifted the title after 10 years. But at the recent XXI Commonwealth Games, Pakistan held India to a draw.

Chief Coach Harendra Singh, who took over the post recently, put things in perspective. "Getting off to a winning start is vital because it sets the momentum for the rest of the tournament. There will be no room for emotions when we take on Pakistan. The team will play against them like any other team where we go for the three points," Hockey India quoted him as saying.

Comments
Topics mentioned in this article
Live Blogs India Pakistan Hockey
Get the latest Cricket news, check out the India cricket schedule, Cricket live score . Like us on Facebook or follow us on Twitter for more sports updates. You can also download the NDTV Cricket app for Android or iOS.