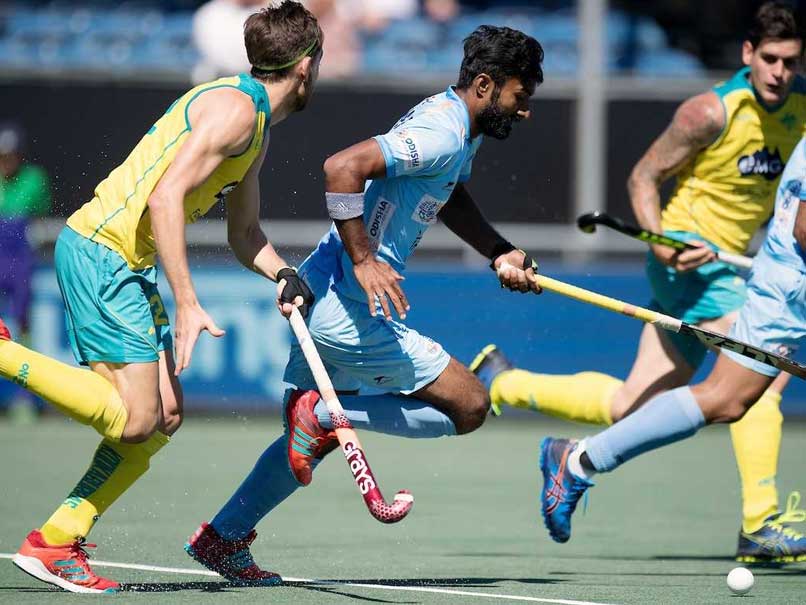 India lost 1-3 to Australia in shootout in the summit clash of Champions Trophy hockey in Breda, the Netherlands. India had managed to play a 1-1 draw with the Netherlands in their final round-robin game on Saturday to set-up the Hockey Champions Trophy final against Australia. Mandeep Singh (47th minute) scored for second-placed India, while Thiery Brinkmann (55th) scored for the third-placed Netherlands as the two teams ended the round-robin stage with eight and seven points respectively. The Netherlands will meet Olympic champions Argentina in the bronze-medal playoff on Sunday after the South Americans defeated Australia 3-1 to take their points tally to seven -- same as the European team. But Argentina are in the fourth spot due to an inferior goal difference. Australia topped the table with 10 points. The final will be a repeat of the 2016 edition when Australia got the better of India via a controversial penalty shootout. India needed at least a draw against the Dutch to keep the opponent away from the place in the final. Both teams showed urgency but India created a goal-scoring opportunity first with youngster Dilpreet Singh making the right call to ask for a video referral. The video umpire ruled in India' favour for a dangerous ball in the striking circle, though Harmanpreet Singh's powerful flick was brilliantly parried away by Dutch goalkeeper Sam van der Ven. Immediately though, the home team launched a quick-fire counter with Seve van Ass taking a shot on goal. But with an in-form PR Sreejesh continuing his outstanding form at the goalpost made it difficult for the Dutch to convert.

Highlights of India vs Australia, Champions Trophy Hockey Final from Breda, The Netherlands

21:10 IST: Oh boy!Harmanpreet finds the net but not before the given time.

21:05 IST: In 2016, Australia defeated India in shootout. Can India beat Australia this time?

20:55 IST: Brilliant effort from Dilpreet. He was so close to the goal.

India have found their long-awaited equalizer in the third quarter and the young man Vivek Sagar rises to the occasion to level things up in this heated #INDvAUS Final encounter of the #HCT2018. #IndiaKaGame pic.twitter.com/cCZSoFqAMb

3/4 time, this one is going down to the wire. 1-1 #PrideOfTheKookas #HCT2018 pic.twitter.com/nxdUbfPTbq

43' GOAL! Vivek Sagar takes the deflection off @chinglensana29's stick and slams a shot in goal past Lovell's left! We are now on equal terms!

We are in the third quarter of the #INDvAUS Final match of the #HCT2018 Team India is trailing by a narrow margin is in quest of the much needed equalizer.#IndiaKaGame

20:29 IST: India fail to convert the penalty corner into a goal.

20:22 IST: Both the teams are in the middle. The third quarter gets underway.

HT| India fall back by a goal despite a capable defensive performance after the @Kookaburras convert their solitary PC through Blake Govers in the Final of the Rabobank Men's Hockey Champions Trophy 2018 on 1st July 2018.#IndiaKaGame #INDvAUS #HCT2018 pic.twitter.com/kWiKNv6qrb

We lead at halftime in the Champions Trophy Final. Govers has the only goal of the match. Make sure you see the second half and tune in via Fox Sports, channel 505. #PrideOfTheKookas #HCT2018 pic.twitter.com/Ldedj2sz0e

20:04 IST: Chance for Australia. Birender Lakra snatches the ball and sweeps away.

20:01 IST:Harmanpreet Singh with the ball. And, he misses it completely.

19:57 IST: The second quarter gets underway.

19:50 IST: Dilpreet with a slight deflection but fails to give India a lead.

19:48 IST: Another Penalty corner for India. Australia are coming under a little pressure

19:46 IST: Howard with a diving defensive effort. Brilliant work from him.

19:42 IST: Beale to Sharp and back to Beale but he fails to gather. Very close.

19:37 IST: Referee blows the whistle and we are underway.

It's PUSHBACK! The Indian Men's Team's clash against Australia in the Final of the Rabobank Men's Hockey Champions Trophy Breda 2018 is now underway.#IndiaKaGame #HCT2018 #INDvAUS pic.twitter.com/H1oVvjfbC7

19:32 IST: Both teams - India and Australia - have lined up for their respective national anthems

Wishing the Indian Hockey team all the very best for the #ChampionsTrophy final against Australia. @TheHockeyIndia #INDvAUS pic.twitter.com/iaH68fBRBP

Three-time Olympic Gold Champion Balbir Singh Sr. wishes the Indian Men's Hockey Team all the best and urges them to go for the gold medal ahead of their match against Australia in the Final of the Rabobank Men's Hockey Champions Trophy Breda 2018. #IndiaKaGame #HCT2018 pic.twitter.com/Rc8XXvQY0g

Here is the starting line-up of the Indian Men's Team that will take on Australia in the Final of the Rabobank Men's Hockey Champions Trophy Breda 2018 at 7:30 PM (IST) today. #IndiaKaGame #HCT2018 #INDvAUS pic.twitter.com/Q5oa7qzM7k

18:38 IST: Australia are defending champions. They won the Champions Trophy title in 2016 in United Kingdom, beating India 3-1 (penalty strokes) in the summit clash. Can India take the revenge today?

18:24 IST: Sreejesh and his men are set for the final showdown against the Kookaburras.

The Indian Men's Team have braved all challenges to make it to the Final of the Rabobank Men's Hockey Champions Trophy Breda 2018 against Australia on 1st July 2018. #IndiaKaGame #INDvAUS #HCT2018 pic.twitter.com/BYdFW6xTzk

Wishing @TheHockeyIndia team all the best for tomorrows final against Australia in Champions Trophy. The whole team played brilliantly to tie the match 1-1 against Netherlands to finish 2nd in the tournament.

18:15 IST: India midfielder Manpreet Singh's message ahead of the summit clash against Australia.

.@manpreetpawar07, midfielder of Indian Men's Hockey Team, shares the hunger and desire which encourages the players to win the Final of the Rabobank Men's Hockey Champions Trophy Breda 2018 against Australia on 1st July 2018.

India won their second penalty corner, thanks to Dilpreet again, but a variation saw Harmanpreet pass the ball to Varun Kumar after Sardar's injection but Varun couldn't get a strong push which was cleared quite effortlessly by the Dutch goalkeeper. Though India gave away three penalty corners by half time, with no score on the board for either teams. The visitors' defence was compact, very alert and yet again had Sreejesh standout. One of his best saves was when Jorrit Croon stole the ball from India's midfield to launch a swift counter, beating a fleet of Indian defenders to make it to their striking circle only to find a perfect pass to Thijs van Dam. But his shot was excellently saved by Sreejesh who remained the cynosure in India's defence.

With a goalless scoreboard, the third quarter was crucial. The Netherlands dominated with ball possession, making 20 circle entries and took six shots on goal. While India had made just 12 circle entries with four shots on goal. India's backline continued to play to structure, with some clever defending while India had a better coordinated move up front with Sunil and Mandeep working in tandem but could not muster a goal in the third quarter.

India, however, opened the fourth quarter with all guns firing. The efforts won them their third penalty corner of the match in the opening minute. Though Harmanpreet's flick rebounded off the Dutch goalkeeper, Mandeep moved up front swiftly to put the ball into the goal and fetched his team the much-needed 1-0 lead in the 47th minute. With time ticking away, Dutch fans rallied behind their home team with encouraging cheers. The home support worked with Brinkman working a stupendous goal from the baseline, beating Amit Rohidas's block to put the ball past Sreejesh and equalise.

Comments
Topics mentioned in this article
India Australia Live Blogs Hockey
Get the latest updates on ICC T20 Worldcup 2022, check out the Schedule and Live Score. Like us on Facebook or follow us on Twitter for more sports updates. You can also download the NDTV Cricket app for Android or iOS.