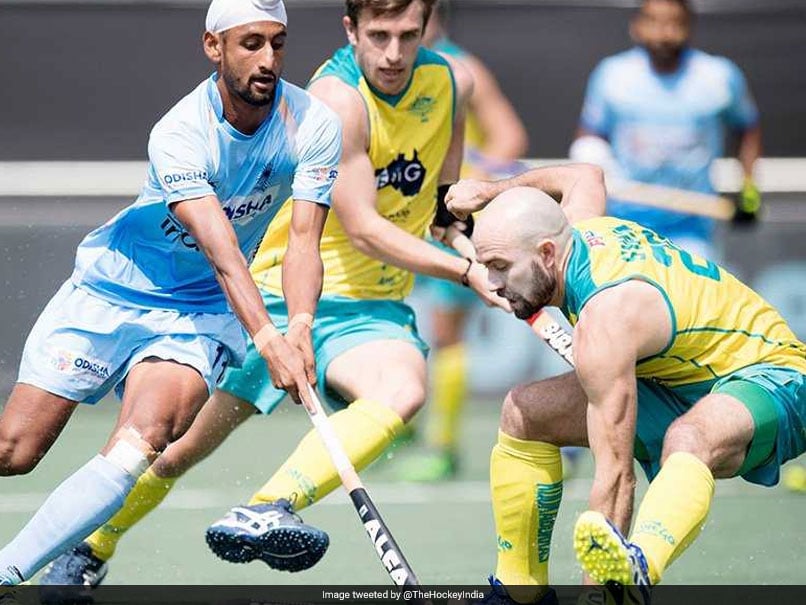 India fought valiantly before going down 2-3 to world champions Australia to slump to their first defeat in the FIH Champions Trophy hockey tournament on Wednesday. Australia produced their best show of the tournament and scored through Lachlan Sharp (6th minute), Tom Craig (15th) and Trent Mitton (33rd) to secure full points. The Indians, however, did not give up and fought till the end, scoring through Varun Kumar (10th) and Harmanpreet Singh (58th), producing a nail-biting finish. The loss meant India slumped to third spot in the standings with six points from two wins behind hosts Netherlands (6 points), while Australia climbed to the top with seven points from three games. The top two sides after the round robin stage of the six-team event will play in the fina of the tournament on Sunday. India will next play Belgium on Thursday.

20:08 IST: GOAL!!!Harmanpreet scores as India make it 2-3 against Australia.INDIA 2-3 AUSTRALIA

19:51 IST: The fourth and final quarter is underway. Can India bounce back?

19:41 IST: What a save from Sreejesh. Harmanpreet sweeps the ball away.

19:28 IST:Both teams are in the middle. The third quarter is underway.

19:18 IST: Sreejesh at his best once again. What an effort from him. He saved the goal with sheer brilliance.

19:17 IST: Video referral and another Penalty Corner has been awarded to Australia.

19:12 IST:Penalty Corner for India. Sardar Singh will take the PC.

19:02 IST:Mandeep snatches the ball and runs towards Australia goalpost.

18:55 IST: Brilliant save by goalkeeper Sreejesh.

18:48 IST: Another Penalty corner for India,

18:39 IST: Chance for Australia but a brilliant work from Sreejesh denies the Aussies a lead.

18:37 IST: Final whistle and the match is underway.

18:33 IST: Both the teams are in the middle for their national anthems.

Here is the Starting XI of the Indian Men's Hockey team who will face Australia for their third clash of the Rabobank Men's Hockey Champions Trophy Breda 2018 at 6:30 PM (IST) today! #IndiaKaGame #HCT2018 #INDvAUS pic.twitter.com/Gt5ISPs05l

17:00 IST: India have played 15 times against Australia over previous editions of the FIH Champions Trophy, scoring 24 goals in the process. Can Team India bring the same goal-scoring touch to the game today?

14:30 IST: Hello and welcome to the Live updates from Champions Trophy hockey 2018 match between India and Australia.

The Indian team earned their first winning points against arch-rivals Pakistan with a stupendous 4-0 win followed by a spirited 2-1 victory against Olympic Champions and World No.2 Argentina in a closely fought encounter to find themselves on top of the pool table. In these two matches, the team showed a distinct hunger to win as they played to strategy, exhibiting aggressive yet structured and disciplined hockey. "We made some key changes in how we defend and attack during our preparations for this tournament. I think one of the main elements is that our strikers are willing to take that extra risk in the circle knowing well enough that the defenders will support them if by chance they lose the ball. I think this change in attitude made them play freely in the first two matches and defending well was our priority," expressed Chief Coach Harendra Singh in retrospect.

The defending champions are placed second behind India in the Pool table after having drawn 3-3 against Belgium and won 2-1 against Pakistan. The match against Australia will be followed by a clash against World No. 3 Belgium on Thursday. India needs to come up with something special yet again if they want to see themselves in the final. Harendra's words to his team ahead of the crucial matches is simple, "Continue to show that hunger to win if you want to see yourself in the final."

Comments
Topics mentioned in this article
India Australia Hockey Live Blogs
Get the latest updates on ICC T20 Worldcup 2022, check out the Schedule and Live Score. Like us on Facebook or follow us on Twitter for more sports updates. You can also download the NDTV Cricket app for Android or iOS.