Indian hockey captain Sardar Singh says the recent tour of the Netherlands has helped the team identify its weaknesses ahead of the World League Round III to be held next month. 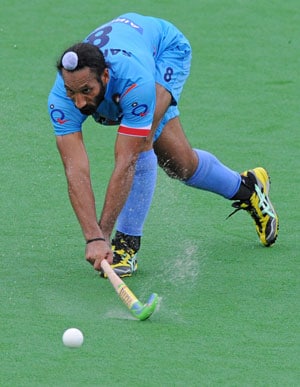 Indian hockey captain Sardar Singh says the recent tour of the Netherlands has helped the team identify its weaknesses ahead of the World League Round III to be held next month.

"It was a good tour and Roelant Oltmans, Indian Hockey's director high performance, made it sure that we got to play against best clubs. We have learnt a lot on this tour . In fact we have identified our weaknesses and now will work harder on them," said the veteran midfielder.

After beating the Netherlands 2-0 in the first match of the tour, India notched up their second consecutive win over the hosts in Rotterdam. Before that they also played five matches against top Dutch clubs and won two of them while one match was draw.

The tour was part of the preparations for the FIH Men's Hockey World League Round III (Semi-final) to be played at Rotterdam from June 13-23.

Apart from India, the Netherlands, Australia, Spain, New Zealand and Ireland will take part in this round where three or four quota place will be decided for the finals.

"We defeated the Netherlands after a long time and this enhanced our confidence level. We also played against top Dutch clubs which included several top international players. We tried to match them in aggression and pace," he said. Sardar also said that video analysis after every match helped the team immensely.

"We used to have one hour video analysis after every match where we got to know about our shortcomings as individuals and as a unit. It helped us to perform better match after match," he said.

Sardar said that team has to work hard to match its tough opponents in World League Round III.

"This team has several young players who are learning from experience. The most important thing is they are implementing the strategy on field but still there is scope for improvement," said the captain.

"All our players and fit and raring to go. Coaches have used the substitution so well that everyone got to enough chance to play and fatigue factor is also not there," he added.

On his nomination for the Khel Ratna award, he said honours such as these are motivating.

"Obviously I am very happy to be nominated from Hockey India. I always try to do my best for country. Awards and recognition inspire every athlete to work harder and perform better," he said.