Hockey World League Final: India Go Down Fighting 2-3 To England In A Thriller

Samuel Ward struck two field goals for England after David Goodfield gave them the lead in the 25th minute. 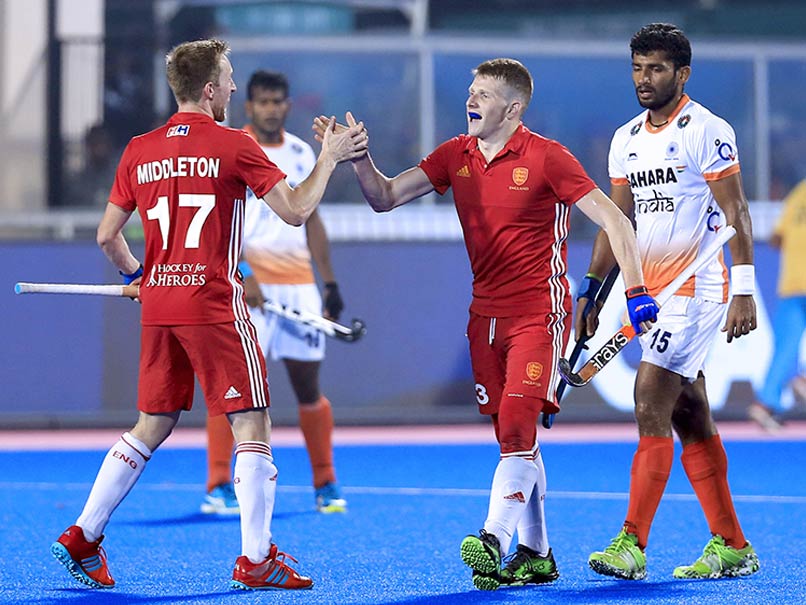 Poor defending cost India dearly as Sam Ward scored a brace for England to hand the home team a heart-breaking 2-3 defeat in a hard-fought Pool B match of the Hockey World League (HWL) Final, on Saturday. Ward (43rd, 57th minutes) struck two field goals for England after David Goodfield gave them the lead in the 25th minute. India's both goals came from penalty corner conversions by Akashdeep Singh (47th) and Rupinderpal Singh (50th). It was a dull first quarter as both the teams failed to create any real scoring opportunities despite playing fast, aggressive hockey. The Indians were nowhere near to the level that they displayed in their first match against Australia.

If the Indians looked orgainsed and controlled against the Kookaburras yesterday, it was completely the opposite, at least in the first quarter, today.

While SV Sunil was guilty of holding on to the ball for too long on more than one occasion, Mandeep Singh's ball trap and waiting was found wanting inside the circle.

England, on the other hand, were happy to sit back and defend and put pressure on the Indian defence when the opportunity came.

The first real scoring chance of the match came in the 25th minute when England secured their first penalty corner but the Indians defended well.

However from the resultant move, David Goodfield scored as the ball went inside the goal after getting a deflection from goalkeeper Suraj Karkera's pads, and India went into the breather trailing by a goal.

Five minutes into the second half, Chinglensana Singh came close to levelling the scores for India but his shot from top of the box was saved by England goalkeeper Harry Gibson.

But against the wishes of the capacity crowd, England doubled their lead in the 43rd minute, courtesy a costly defensive lapse by Harmanpreet Singh.

Harmanpreet failed to trap Luke Taylor's long scoop and that fell before the sticks of Ward behind him and he made no mistake.

The Indians finally tasted success from their third set piece when Akashdeep scored from rebound after Rupinder's initial try was saved by Gibson.

However, once again India's perennial problem -- defence -- cost them a point as Ward struck three minutes from the hooter after skipper Manpreet Singh failed to clear the ball in their own half and it was pounced on by the England player to set up the winner.

India will next play Germany in their final pool match on Monday.

Meanwhile, in the other Pool B game of the day, Germany and Australia played out a 2-2 draw.

Australia will finish off the pool engagements against England on Monday.

Comments
Topics mentioned in this article
India England Hockey
Get the latest updates on India vs South Africa and check out  Schedule, Results and Live Score. Like us on Facebook or follow us on Twitter for more sports updates. You can also download the NDTV Cricket app for Android or iOS.