The Indians started on a bright note and played above their weight to create numerous scoring chances in the match. 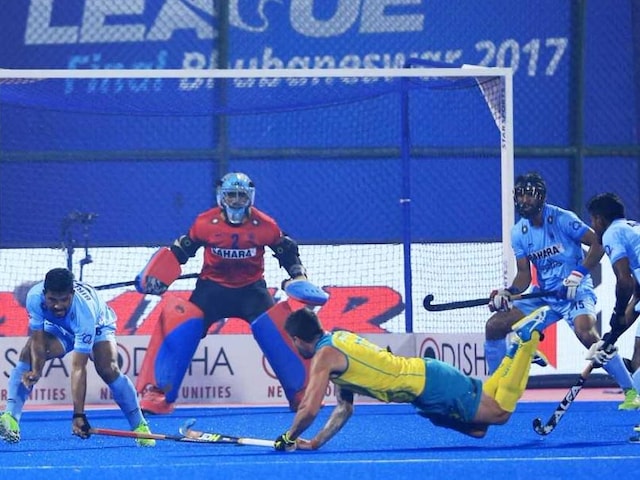 India produced an impressive display but wasted chances galore as they held defending champions and world number two Australia to a 1-1 draw in their opening pool match of the Hockey World League Final on Friday. Playing in front a partisan crowd at the floodlit Kalinga Stadium, India by far were the better side on display and outplayed Australia in terms of ball possession. The Indians got off to an attacking start and scored the opening goal of the match through Mandeep Singh's field strike in the 20th minute. But it was equalised soon after when Jeremy Hayward converted a penalty corner for Australia (21st minute).

The Indians started on a bright note and played above their weight to create numerous scoring chances in the match but the forwards, especially Gurjant Singh and Akashdeep, were off colour during the match.

India almost took the lead with the first move of the game. It was S V Sunil who started the move and set it up for an unmarked Gurjant inside the circle but the young striker's reverse was saved by an agile Tyler Lovell in front of the Australian goal.

Two minutes later, Lovell came to his side's rescue again as he made a double save to deny the hosts. First, he blocked Akashdeep's effort from close range and then made another fine save to deny Gurjant for the second time in quick succession.

India played a high intensity game in the first quarter and kept up the pressure on Australian defence with continuous forays. In the process, they earned the first penalty corner of the match in the sixth minute but comeback man Rupinderpal Singh flicked the ball straight to Lovell, who blocked it with his left hand.

Australia's lone scoring opportunity of the quarter came in the 12th minute from a penalty corner but Indian custodian Akash Chikte dived to his right to keep the ball away.

The Indians continued in the same vein in the second quarter and had another great scoring chance in the 17th minute only for Akashdeep to hit wide from a Sunil assist that fell in front of his stick after getting an Australian deflection.

It took a splendid field goal from India to break the deadlock in the 20th minute that was set up by skipper Manpreet Singh, who was outstanding in his 200th international cap.

Manpreet first gathered the ball from deep inside Indian half and then gave an inch-perfect midfield splitting reverse hit pass to Lalit Upadhyay who in turn sent the ball forward to Mandeep inside the Australian circle and the striker did the rest to send the capacity crowd into a frenzy.

But India's lead was shortlived as Australia drew level in the very next minute through a penalty corner conversion by Jeremy Hayward.

Thereafter, Australia earned another penalty corner when Amit Rohidas was found guilty of high stick inside his own circle but the Indian defence stood tall to thwart the danger and go into the breather locked at one goal apiece.

Missed chances continued to haunt India as they wasted two more penalty corners minutes into the second half.

The Indians also wasted their only referral when Rupinder asked for an Australian foot inside the opposition circle.

The Australians pressed hard in the third quarter and and in the process earned two more short corners, the first of which was brilliantly kept away by local hero Birendra Lakra, who made an overhead goal-line save.

The Kookaburras pressed hard in the third quarter and secured two more short corners but the Indians defended stoutly to deny their rivals.

It was a hard fought final quarter as both the teams went hard in search of the winner and the Indians came close at least twice, the second of which was their fourth penalty corner, which the hosts wasted as they could not stop the push.

India will play England in their next pool match tomorrow, while Australia will be up against Germany.