Netherlands thrashed Canada while Belgium hammered Pakistan in the crossover matches of the Hockey World Cup to qualify for the quarter-finals. 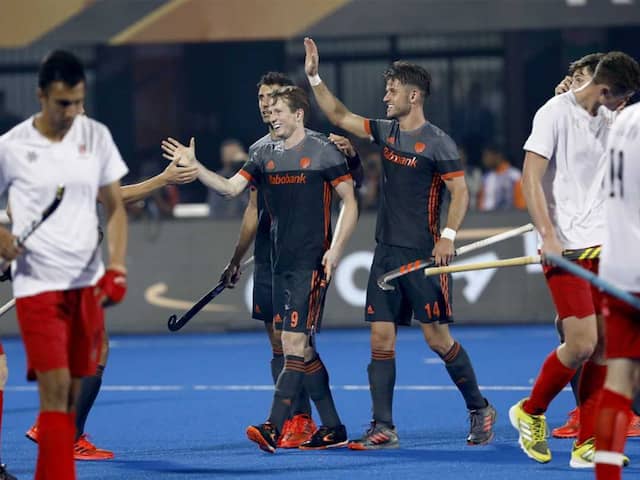 Netherlands were a little sloppy with the PC conversion but at the end registered a comfortable victory.© FIH

Netherlands and Belgium qualified for the Men's Hockey World Cup 2018 quarter-finals after they outclassed Canada and Pakistan by an identical score line of 5-0 in their respective crossover matches at the Kalinga Stadium in Bhubaneswar on Tuesday. Netherlands will take on hosts India, while Belgium will face Germany in the quarter-finals on Thursday. The other quarter-final matches will be played between Argentina and England, and Australia and France on Wednesday.

The second match between Netherlands and Canada saw some brilliant hockey from the Dutch side. Netherlands were a little sloppy with the penalty corner conversion but at the end registered a comfortable victory.

Thijs van Dam (40th minute and 48th) scored a brace while goals from Lars Balk (16th), Robbert Kemperman (20th) and Thierry Brinkman (41st) helped the Dutch team to enter the next round.

On Monday, England outclassed New Zealand 2-0 in the first cross-over match. England, who will now take on Olympic champions Argentina in the first quarterfinal on Wednesday, scored their first goal in the 25th minute as Will Calnan got on the score sheet with a field strike.

In the other game, France reached their first quarters by edging past stubborn China 1-0. They will take on Australia in the last-eight stage on Wednesday. Timothee Clement sounded the board in the 36th minute.