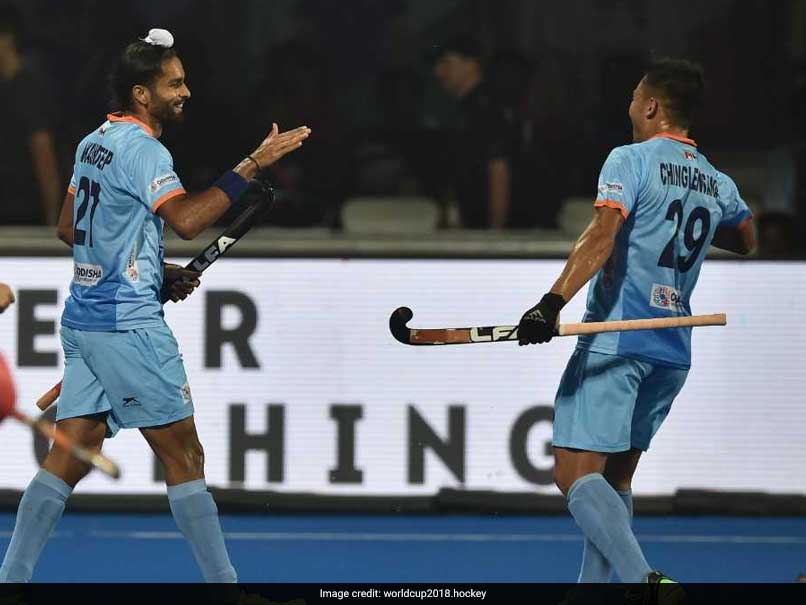 A five-star performance from India saw them outclass South Africa 5-0 in their opening Pool C clash of the Hockey World Cup 2018 at the Kalinga stadium in Bhubaneswar. Simrajeet scored a brace while Mandeep, Akashdeep and Lalit Upadhyay scored a goal each. The hosts looked the better side out of the two from the onset of the match, they continuously imposed threat on the opposition. South Africa, hardly managed to get hold off the possession as they played in their own half for most of the time. India along with Belgium got off to a winning start in Pool C. Both the teams now have three-points each and will face each other in their second match on December 2.

20:30 IST: Thank you for joining us on the live action, we leave you with the highlights from the match. Until next time, it's goodbye!

20:17 IST: Lovely movement from Mandeep,beats experienced Austin Smith but the last-ditch defence keeps the threat out.

20:14 IST: Penalty Corner for India!Harmanpreet this time, but he failed to get his angle right, the key dragflicker for India in absence of Rupinderpal.

20:11 IST: Penalty Corner for India! GOAL!Simranjeet strikes again for India, he scores a brace as the hosts lead 5-0 in the 46th minute. He waited for the re-bound inside the circle, was in space and smashes the ball in the near corner. Is it going to be a World Cup hat-trick for Simranjeet?

46' GOAL! Simranjeet strikes again as he feeds off the rebound to finish past the South African GK.

20:07 IST: GOAL!Lalit beautifully guides the ball in the near corner, from an outrageous assist from Akashdeep.

45' GOAL! @akashdeeps985's awareness comes into play as he delivers a deep ball into the circle with just power on it speed for @lalithockey to deflect into the goal.

20:04 IST: GOAL! Simranjeet scores the third goal for India,great play from Mandeep just passes the ball to Simranjeet in space. India lead 3-0 against South Africa after 43 minutes. That should put the game to bed!

43' GOAL! @mandeepsingh995's quick run and cross into the circle are perfectly timed for Simranjeet to finish. India lead by 3!

20:01 IST:Simranjeetruns away with the ball from the left flank, moves inside the circle, but fails to make the most of it.

19:58 IST: Lalit tries to break free,not much support for him. Dilpreet comes forward but the South African defense intercepts the ball well to halt the progress.

19:57 IST: India keeping the pressure,searching for the third goal. 43 years since India won the World Cup, remind you they have never won it at home.

19:52 IST: Penalty Corner for India!Skipper Manpreet pull the ball out inside the circle, Harmanpreet had the time and space to finish the ball in the far corner, but he hits it wide.

19:51 IST: South Africa looking to work the ball up,but Harmanpreet comes in the way to dispossess them.

19:39 IST: There goes the Hooter!India leads 2-0 against South Africa at half-time. No goals in the second quarter but the hosts maintain their two goals lead from the Q1.

When the architect of modern hockey Dhanraj Pillay comes out himself to cheer the men in blue in their opening campaign of the Odisha Hockey Men's World Cup Bhubaneswar 2018 against South Africa on 28th November.#IndiaKaGame #HWC2018 #DilHockey pic.twitter.com/dQ2cHcTPnB

19:33 IST: Chance for South Africa,forcing PR Sreejesh for a save! South Africa again buildin but the lose the ball, India flooding forward. Manpreet fails to make the most of the chance. India maintain their 2-0 lead over South Africa.

19:30 IST: Lalit opens up space on the right flank, passes the ball ahead but South Africa did well to halt their progress.

19:27 IST: Penalty corner for India!Harmanpreet takes the shot, but the South African defender does well to keep the ball out if the net.

19:24 IST: Second quarter gets underway,India are again on an attack from the left flank. Spreading the play well.

19:18 IST: India have 82 percent possession in favour of them so far,they are putting up an exhibition of passing and patient built-up play here.

19:17 IST: GOAL!Akashdeep doubles the lead for India, what a dream start for the hosts. India lead 2-0 against South Africa after 12 minutes in the World Cup.

12' GOAL! @akashdeeps985 makes it two in favour of India as he uses his poacher's instinct to get to the ball first in a crowded circle and finishes with class.

19:16 IST: South Africa has not enjoyed much possession on the ball,India continue to pose threat.

19:13 IST: Penalty Corner for India,Akashdeep shoots the ball inside the circle. And Mandeep gives India the lead, he took two touches from the stick and executed the shot to perfection. India lead 1-0 against South Africa in the ninth minute.

9' GOAL! @mandeepsingh995 gets India off to a great start as he slams in the rebound from @13harmanpreet's set-piece flick.

19:08 IST: India trying to spread the play,opening attack from the left flank. Great interception from Lalit and Sumit tried to enter the circle but the South Africa goal keeper does well to keep the threat out.

19:07 IST: Chance for Mandeep,but it was a heavy touch. Mandeep failed to get the ball in control. India continue to look threatening on the opposition.

19:00 IST: The first quarter is underwayand India are straightforward looking to make an attacking start. Akashdeep, Mandeep and Dilpreet will look to give India an early lead.

18:57 IST: Chinglensana Kangujammakes his 200th appearance for the national team. The national anthem takes the centre stage at the Kalinga Stadium.

18:55 IST: Here is how India and South Africa have lined upfor their opening match in the Pool C.

| MATCHDAY | Here's the Starting XI for @TheHockeyIndia and @SA_Hockey_Men as they face-off to begin their WC campaign.#HWC2018 #Odisha2018
#INDvRSA pic.twitter.com/ZIIgGOSc2V

18:40 IST: Belgium beat Canada 2-1 in the opening fixture of the 2018 Hockey World Cup.We are 20 minutes away from India's opening clash.

18:20 IST: Hockey India has shared some words of encouragement ahead of India's opening clash.

18:15 IST: It's a double-headed start to the World Cupand Belgium currently lead the pool stage match against Canada 2-1 in the fourth quarter.

Are you ready for the first match day?
Odisha #HWC2018 Bhubaneswar
Comment flag of the country you are cheering for today!
Check the list of broadcasters https://t.co/j2Rk5q8Xrj
@FieldHockeyCan @BELRedLions @SA_Hockey_Men @TheHockeyIndia pic.twitter.com/XdfToUZ3pE

18:10: Superior ranked India (5th)host South Africa (15th) in their opening match. Let us have a look at some the stats:

18:00 IST: Hello and welcome to the live commentary from the Hockey World Cup 2018 match between India vs South Africa.

But with India, who are ranked fifth in the world, showing massive signs of improvement, there is hope again. In the recent past, India reached the final of the Champions Trophy where they lost to hockey powerhouses Australia 3-1 in a shoot-off after both teams were locked at 1-1 in regulation time. In the Asian Games 2018, India dominated the tournament, scoring a record 76 goals in the pool stages. However, India suffered a shocking penalty shoot-off defeat to Malaysia in the semi-finals. Despite the demoralising loss, India bounced back quickly and beat arch-rivals Pakistan to clinch the bronze at the Asiad. However, if India have to break their World Cup jinx, they will have to get the better of the likes of two-time defending champions Australia, the Netherlands, Germany and Olympic champions Argentina.

The last time India played a World Cup at home, in 2010 in New Delhi, they finished a lowly eighth. The Indian team is being led by midfielder Manpreet Singh, while the vice-captain of the squad is Chinglensana Singh Kangujam. Hosts India begin their campaign against 15th-ranked South Africa on the opening day of the tournament on Wednesday. The squad features PR Sreejesh and Kishan Bahadur Pathak as goalkeepers, while defender Birendra Lakra returns to the fold after missing the Hero Asian Champions Trophy in Muscat last month. Lakra is now fully fit after a nagging knee injury.

The squad also features Amit Rohidas, Surender Kumar, Kothajit Singh and 2016 Junior World Cup winners Varun Kumar and Harmanpreet Singh. In order to get through to the quarter-finals, India will have top Group C, which comprises World No.3 Belgium, Canada and South Africa.

Comments
Topics mentioned in this article
India South Africa Live Blogs Hockey
Get the latest updates on Olympics 2020, Olympics 2020 Medal Tally, Live Cricket Score . Like us on Facebook or follow us on Twitter for more sports updates. You can also download the NDTV Cricket app for Android or iOS.