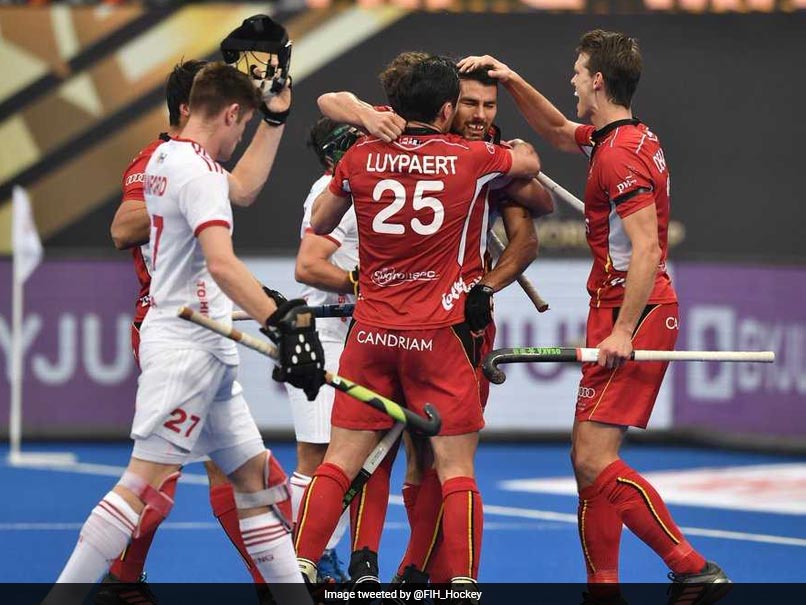 Belgium put in a brilliant performance to blow away England in the Men's Hockey World Cup semifinal.© FIH

Olympic silver medallist Belgium marched into the final of the Men's Hockey World Cup 2018 following a 6-0 demolition of England. The historic win for Belgium in the lop-sided semi-final at the Kalinga Stadium on Saturday helped them reach their maiden World Cup final. The Belgians scored in all our periods with Alexander Hendrickx (45th, 50th) converted two penalty corners, while Tom Boon (8th), Simon Gougnard (19th), Cedric Charlier (42nd) and Sebastien Dockier (53rd) chipped in with a goal each for the team ranked number three in the world.

Belgium have never in their history made an appearance in the final of a World Cup with a fifth-place finish in the last edition of the tournament at The Hague, Netherlands in 2014, being their best performance at the showpiece event.

The Belgium players, who wore black armbands to pay respect to their teammate Gougnard whose father passed away before the match, dominated possession in the first two quarters and created numerous chances, two of which resulted in goals.

It didn't take long for Belgium to take the lead as Boon deflected in Florent van Aubel's measured cross from the left in the eighth minute.

Just seconds from the end of first quarter, Boon again came close but his deflection from a long ball hit the post.

Belgium doubled their lead in the 19th minute through Simon Gougnard, who scored from a rebound after Hendrickx's flick from their first penalty corner was saved by England captain and goalkeeper George Pinner.

The Red Lions missed a sitter three minutes from half-time when an unmarked Dockier pushed wide Van Aubel's pass, with only Pinner to beat.

Just a minute after the change of ends, England secured their first penalty corner, but the team, ranked seventh, failed to capitalise on the opportunity.

Belgium extended their lead in the 42nd minute through Charlier, who scored with a fierce shot from a close range.

Minutes later, England earned another penalty corner but Belgium goalkeeper Vincent Vanasch was up to the task, and thwarted the danger with a fine save.

Seconds from the end of the third quarter, Belgium made it 4-0 when Hendrickx found the back of the English net from his team's second penalty corner.

Belgium continued to toy with the English defence and pumped in two more goals in the fourth and final quarter to make the last-four contest a thoroughly one-sided affair.

Comments
Topics mentioned in this article
England Hockey
Get the latest updates on India vs Australia and check out  Schedule, Results and Live Score. Like us on Facebook or follow us on Twitter for more sports updates. You can also download the NDTV Cricket app for Android or iOS.