In the second leg on Saturday, the USA will need a miracle to harbour any hopes of making the Olympics cut. 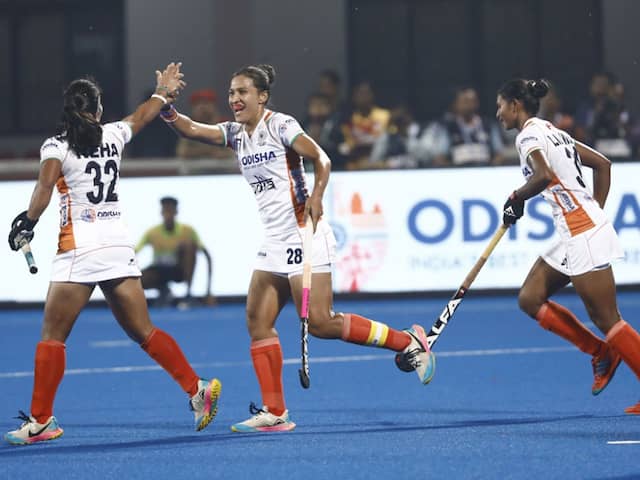 The India women's hockey team put one foot in the Tokyo Olympics next year by registering a 5-1 victory over the United States in a qualifier first leg clash at the Kalinga Stadium in Bhubaneswar on Friday. India scored four goals in 11 minutes after halftime to kill the tie as Gurjeet Kaur scored a brace. Erin Matson scored a consolation goal for the USA in the 54th minute from a penalty stroke and the 13th-ranked away side got a a host of chances to reduce the deficit in the dying minutes but it was not enough. In the end the hosts took a huge step towards the Tokyo Olympics.

In the second leg on Saturday, the USA will need a miracle to harbour any hopes of making the Olympics cut.

India began with a high-press but the USA were sharp in creating chances and getting its shots away.

Early in the second quarter, India got their first clear-cut chance when Lalremsiami hit a cross from the left towards an onrushing Sharmila at the far post. However, the winger was unable to get on the end of the cross and the USA had a lucky escape.

The USA earned a lot of penalty corners but the Indian defence stood firm before, completely against the run of play, India took the lead in the 29th minute.

The hosts won back to back penalty corners and Sharmila worked the ball away to Neha Goyal on the baseline, who then did brilliantly to fend off her marker and pass the ball to Lilima Minz, who stabbed home from close.

India led 1-0 at halftime. The script took a turn for the worse for the visitors in the second period as India scored two more goals in quick succession.

First, Vandana played a one-two on the left to put Sharmila Devi in the clear who then deflected the ball into the goal to double India's lead in the 40th minute.

Two minutes later, Gurjit sounded the board in her fourth attempt as India started pulling away.

In the fourth quarter, they became more dominant and threatened to score from almost every foray. In the 46th minute, Salima Tete burst into the out circle to put Navneet Kaur through and the latter smashed home from the edge of the circle to make it 4-0. India made it five goals in their favour when Gurjit scored her second from a penalty stroke.

Matson scored one from a penalty stroke too for the USA but it was scant consolation for them as they failed to find more goals in the remaining eight minutes.

The team with the highest number of goals over the two matches will qualify for the Olympics. If both the teams are tied on goals after the second-leg, then there will be a penalty shootout to decide the winner.

The ninth-ranked Indian women's team beat the USA only once in their past ten encounters. The victory came in July, 2016 in the tri-series involving India, USA and Canada.