With a heavy calender lined up this year, Indian men's hockey team chief coach Sjoerd Marijne has set his sights on retaining the Asia Games crown to give his players ample time to prepare themselves for the 2020 Tokyo Olympics. 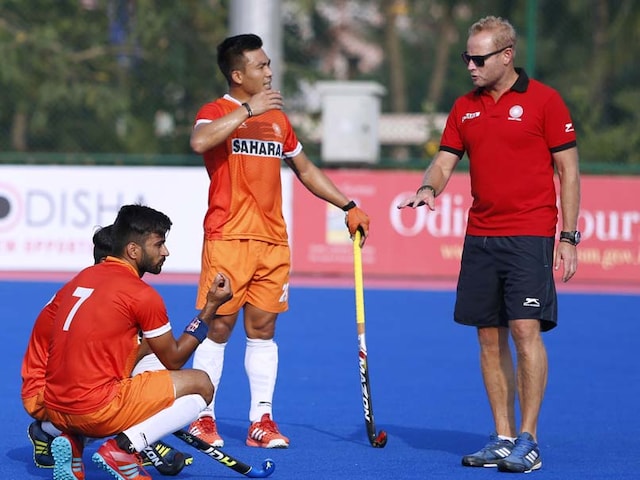 Marijne said other tournaments will act as a preparatory platform in the pursuit of his team's goal.© Hockey India

With a heavy calender lined up this year, Indian men's hockey team chief coach Sjoerd Marijne has set his sights on retaining the Asia Games crown to give his players ample time to prepare themselves for the 2020 Tokyo Olympics. India has a heavy schedule this year with as many as four important international tournaments lined up in Commonwealth Games, Champions Trophy, Asian Games and the season-ending FIH men's World Cup, besides the Azlan Shah Cup. But for the coach winning the Asian Games and World Cup sits at the top of his agenda.

"I want to win the Asian Games and the World Cup. Those are my two objecives.

If you win the Asian Games, you become the first team in the world to qualify for the Olympics. So you get almost 2 years to prepare and that would be perfect. That's what we are aiming for," a determined Marinje told reporters in New Delhi on Thursday.

Marijne said other tournaments will act as a preparatory platform in the pursuit of his team's goal which are Asian Games and World Cup.

"The Champions Trophy we can use to prepare for the Asian Games. The level is really high and that's good for us. It's really an honour to be a part of the last Champions Trophy."

Since taking over the charge of the team four months back, Marijne has been experimenting with the squad in every tournament and the coach said the process will continue until he finds the right combination.

"During the New Zealand tour, we had another group from the World League Finals and Asia Cup and it also will be the same with the Azlan Shah and the Commonwealth Games.We have to think about the mental state of the players and their body," he said.

"We have good depth in the team. We have involved a lot of players in the last few months and we did that with purpose thinking about this year. In the New Zealand tour a few youngsters made their debut," Marijne said.

"It's about finding a right mix of experienced and junior players. We want to have depth."

Marijne so far has had a successful outing with the Indian men's team, winning medals in both the Hockey World League Final and Asia Cup under him.

Asked whether he feels any outside pressure, Marijne replied: "No, I don't feel pressure. The highest pressure I feel is from myself. I want to win everything. But the most important is players want to win.

"They want to have a legacy and there is nothing beautiful than creating legacy. And you create legacy by winning medals."

Veteran Sardar Singh is in the twilight of his career and is no longer a certain in the squad. Marijne also refused to comment anything on individual players.

"I never talk about individual players. I can't say anything about the announcements of team for Azlan Shah," he said.