FIH Pro League: India cruised past France in what was also their first match of the year. 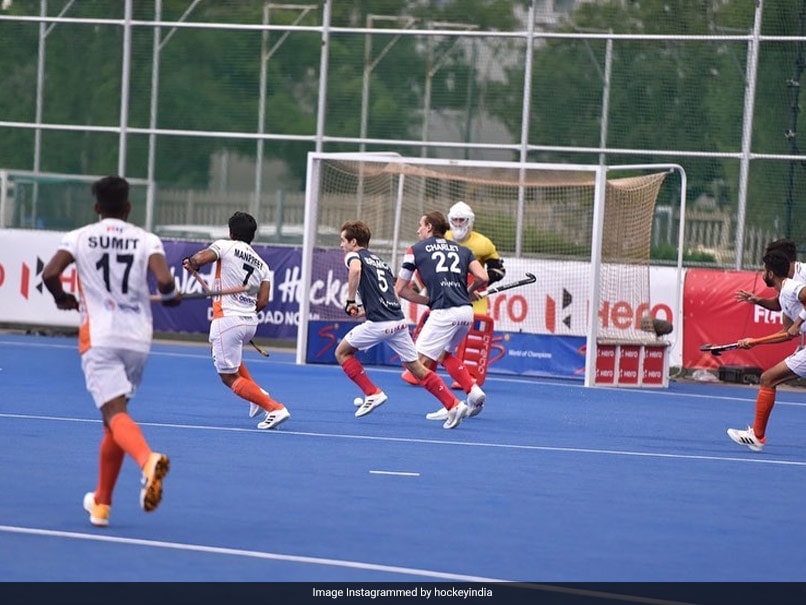 Olympic bronze medallist India began their FIH Pro League Hockey campaign with a bang as they thrashed France 5-0 in a thoroughly dominant display on Tuesday. After a barren first quarter, India slammed three goals in the second before finding the target twice in the third. India got four penalty corners in the match from which they scored two. France got three PCs but wasted all of them. Harmanpreet Singh and Varun Kumar scored from penalty corners in the 21st and 24th minutes respectively before Shamsher Singh made it 3-0 in the 28th minute with a field goal.

Mandeep Singh (32nd) and Akashdeep Singh (41st) completed the tally for India who had won a historic Olympic bronze after 41 years in the Tokyo Games.

Playing in their first match of the year, world number three India took some time to settle down in the first 15-minute quarter. But once they had got a measure of their opponents, the Manpreet Singh-led side upped their ante and dominated their opponents in the remaining three quarters.

Nilakanta Sharma got a chance early in the match but he shot over. India got back-to-back penalty corners in the first quarter but France defence stood firm and defended them well.

India began their domination in the second quarter and got their third penalty corner from which they took the lead in the 21st minute. Drag-flicker Harmanpreet made no mistake from the PC, drilling a low shot at the right of France goalie.

Three minutes later, India got another penalty corner, their fourth of the match, and this time Varun Kumar scored to make it 2-0, sending a low shot almost exactly as the first goal.

The 13th-ranked France, who had replaced Canada in the FIH Pro League last month after the North American country withdrew due to COVID-19 restrictions, got their first penalty corner in the 27th minute but the Indians defended it from the harms way.

Just after defending the PC, the Indians made a swift counter-attack which resulted to their third goal in the 28th minute. Shamsher Singh slammed home past a hapless France goalie from an assist from Abhishek.

India had 14 shots at opposition goal in the first half as against five of France and the Graham Reid's side continued to dictate terms in the match after half time break.

Mandeep Singh made it 4-0 two minutes into the third quarter with a fine field goal before Akashdeep Singh, who was playing in his 200th international match, made it 5-0 in the 41st minute with another field goal, finding the target with a reverse sweep.

France got back-to-back penalty corners in the 48th minute but could not score.

The fourth quarter did not yield any goal but the Indians would be satisfied with their performance.

Comments
Topics mentioned in this article
India Hockey
Get the latest updates on IPL Auction 2023 and check out  IPL 2023 and Live Cricket Score. Like us on Facebook or follow us on Twitter for more sports updates. You can also download the NDTV Cricket app for Android or iOS.