South Korea equalised through brisk counter in the 57th minute, only for Nikkin Thimmaiah to reclaim the lead within 30 seconds with a fine deflection on Talwinder Singh's diagonal cross from left 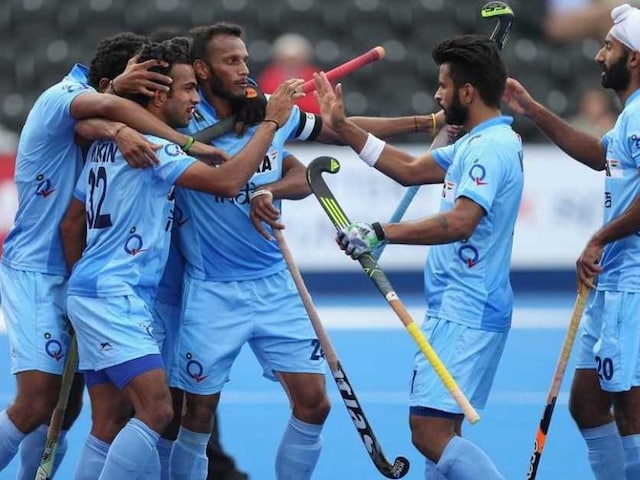 South Korea equalised through brisk counter in the 57th minute, only for Thimmaiah to reclaim the lead within 30 seconds with a fine deflection on Talwinder Singh's diagonal cross from left.

The narrow victory ensured India stayed in the hunt for a medal in the Champions Trophy. India now have seven points from four matches going into the last league fixture against World champions Australia on Thursday.

India enjoyed territorial dominance from the beginning and broke into the rival circle on several occasions, but were not smart on the final pass and allowed the Korean custodian to breathe easy.

India's first foray into the Korean circle was in the 11th minute after Mandeep Singh snatched the ball from a defender on the right flank and sprinted into the circle.

He wasted the opportunity by not squaring the ball to Talwinder Singh and instead tried to himself move up further, thereby narrowing the angle and feebly pushing straight into the goalkeeper's pads.

Two minutes later, the Korean striker Lee Nam-yong received a long aerial ball on deep in the Indian right wing, but was crowded out of possession by the defenders.

Sustaining pressure from the right flank, Indian striker SK Uthappa sent a diagonal pass into the circle, but Talwinder was not able to get control of the ball.

Defender VR Raghunath came to India's rescue with a good save in the 14th minute and also generated the Indian counter-attack, but the strikers were again at a loss of ideas after getting on top of the rival circle.

Chinglensana Singh opened up the Korean defence with a fine cross from the left flank in the 22nd minute, but Nikkin Thimmaiah faltered as the ball struck his foot. Two minutes later, striker Sunil was not able to reach a long through pass from Akashdeep Singh into the vacant area before the Koreans mounting their first dangerous raid. The Indian goal had a close shave with goalkeeper PR Sreejesh blocking the flick from close range.

Defender Raghunath managed to control the rebound despite another striker lurking just behind him. India's raids finally produced a goal in the 39th through Sunil, who exchanged passes with Akashdeep Singh and then side-stepped the onrushing goalkeeper to push the ball into an open goal.

Watching the Indians move into the circle, goalkeeper Hong Doop-yo committed himself to moving up to tackle Sunil and that gave Sunil the chance he capitalised upon. The first penalty corner of the match was earned for India by Thimmaiah as he deftly put the ball on to the defender's foot in the 42nd minute.

The penalty corner was wasted a the push was not stopped, but the Indian strikers tried to continue the attack and Manpreet's crack into a crowded circle was deflected out. India forced two consecutive penalty corners in the 48th minute, but Raghunath failed to breach the Korean defence. On a brisk counter-attack in the 49th minute, the Koreans threatened the Indian citadel, but Lee Nam-yong did not take a shot at the goal.

He tried a pass instead, only to see Uthappa intercept it and ward off danger. South Korea came back to equalise in the 57th minute through a brilliant deflection by Kim Jun-hu on a long ball into the boards, leaving defender Surender Kumar and goalkeeper Sreejesh stunned.

But a quick retort saw India regain the lead within 30 seconds as Talwinder's diagonal cross from left went wide of the Korean goalkeeper and Thimmaiah deflected the ball into the goal for the winner.