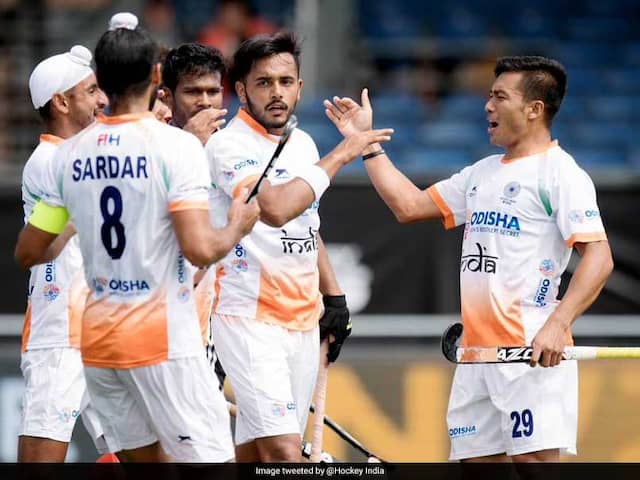 India will take on world champions Australia in their next round robin match on June 27.© Hockey India

India stunned Olympic champions Argentina 2-1 to register their second consecutive victory in the Champions Trophy hockey tournament in Breda, Netherlands on Sunday. India scored both their goals in the second quarter through Harmanpreet Singh (17th minute), who converted a penalty corner, and Mandeep Singh (28th). World number two Argentina's lone goal came from the sticks of dragflciker Gonzalo Peillat, who scored from a set piece in the 30th minute.

Both teams coming into their second round robin match after comfortable wins on the opening day, played out an exciting first quarter. Argentina stretched the Indian defence early in the match as they made potential frays into the striking circle. A stick check by Jarmanpreet Singh while tackling Matias Paredes in their striking circle saw India concede a PC. However, excellent PC defending kept Argentina's ace dragflicker Gonzalo Peillat from scoring, ending the first quarter in a stalemate.

Two minutes into the second quarter, India drew first blood when a deliberate foul by Maico Casella while tackling Harmanpreet Singh fetched India their first PC of the match. A perfect injection by Sardar Singh was further improvised by Harmanpreet who kept it low as he used a powerful flick to sound the board. The 1-0 lead in the 17th minute gave India the momentum to put pressure on the Olympic Champions. India stretched the lead to 2-0 in the 28th minute when a brilliant overhead pass was perfectly picked up by young Dilpreet Singh who cautiously maneuvered to play it across to Mandeep Singh who made no mistake in deflecting it past the Argentine goalkeeper. The Olympic Champions bounced back immediately with a strong attack, as they forced an error to win a PC in the 30th minute. Peillat was absolutely impressive when he found the top corner of the net to beat Indian goalkeeper PR Sreejesh.

With Argentina narrowing India's lead to 2-1, India threaded cautiously, keeping up the structure while their defence ensured they left no space for Argentine forwards to create opportunities. Argentina rallied on their strongest weapon- PCs and even earned one (their fifth PC) but Peillat fired wide. India, on the other hand, took three consecutive shots on goal second before the third hooter. Dilpreet, Mandeep and Lalit attempted the shots but could not beat goalkeeper Tomas Santiago who did well to save.

The fourth quarter was tense with India looking to pull off something similar to the match against Pakistan where they scored three goals in the final 15 minutes. India however kept the ball tight and looked for an opening. With five minutes left, India were reduced to ten players with Birendra Lakra getting a yellow card. It was absolutely tense final few minutes as India held on to the lead with tactical defence to end the match with a 2-1 victory.

India will take on world champions Australia in their next round robin match on June 27.