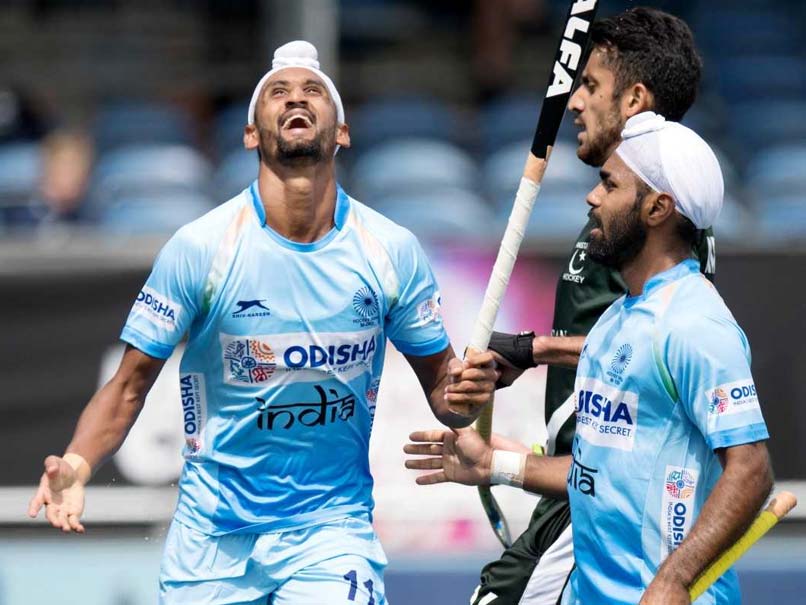 India defeated Argentina 2-1 to register their second consecutive victory at the Champions Trophy hockey tournament on Sunday. Harmanpreet Singh gave India the lead off a penalty corner in the 17th minute before Mandeep Singh (28th minute) doubled the advantage with a field goal. Matias Paredes powered home a penalty in the 30th minute to reduce the margin for Argentina. India had thrashed arch-rivals Pakistan 4-0 in their inaugural match. Ramandeep Singh, Dilpreet Singh, Mandeep Singh and Lalit Upadhyay scored for the men in blue who completely dominated their opponents throughout at the packed BH & BC Hockey Stadium. It was Roelant Oltmans-coached Pakistani outfit who were on the attack mode right from the start. India's goalkeeper PR Sreejesh was put to task in the initial minutes of the match when Muhammad Irfan Junior took a strong shot on goal but the Indian skipper was up to the challenge, making an impressive save. For Pakistan, it was the experienced Muhammad Irfan holding their defence. They used pace in the midfield to hold sway, and did not allow India easy circle entry. India tried high balls to penetrate and make space in the striking circle but it did not work. However, a clever stick work by Mandeep Singh in the baseline helped India win the first PC of the match. The chance though went begging as Harmanpreet Singh couldn't get the right pace on his flick, as Pakistan's experienced goalkeeper Imran Butt broke no sweat to save. The second quarter was crucial for India after a goalless start. Mandeep brought hope again with another impressive effort to fetch India their second PC in the opening minute of the quarter but a poor injection wasted the opportunity.

17:07 IST: Chance for India. SV Sunil runs with ball. He hits but the ball goes outside the goalpost.

17:05 IST: Argentina players are trying hard for an equaliser.

17:02 IST: 4minutes to go in the match. Can India maintain their lead against Argentina?

16:55 IST:Mandeep Singh collects the ball inside the deep but fails in front of Argentine defence.

16:52 IST: The fourth and final quarter is underway.

16:47 IST: Spectacular work from Argentina goalkeeper Santiago. India tried twice to score the third goal but Santiago denied them all the chance. Superb work from him.

16:43 IST: What an effort from Mandeep. Good running from him. But Argentine defence denies him another goal.

16:35 IST:The third quarter between India and Argentina is underway.

HT| The Indian Men's Hockey Team keep up the momentum with a fine performance in the first half, as @13harmanpreet and @mandeepsingh995 score a goal each in their second game of the Rabobank Men's Hockey Champions Trophy on 24th June.#IndiaKaGame #INDvARG #HCT2018 pic.twitter.com/OaIq7RjhNn

16:23 IST: GOAL!!!Argentina pull one back with a powerful penalty corner. India lead 2-1 with a minute remaining for the end of 1st half.

29' @13harmanpreet's shot from the set-piece is blocked by the Argentine defense. India will take a 1 goal lead into the second half of this game.

16:17 IST: GOAL!!!!Mandeep Singh scores as India take 2-0 lead against Argentina. This is Mandeep's second goal of the tournament.

16:12 IST: Another Indian suffers injury. Surender Kumar is out of the field as the ball hit him hard.

16:10 IST: Argentina have a chance again but brilliant defending by India players.

16:06 IST: A very good chance for Argentina. The Argentine hits the ball hard but Sreejesh denies Argentina the lead.

A big shout out goes to @imsardarsingh8, who is playing his 300th international match, for captaining the Indian squad today in their second game at the Rabobank Men's Hockey Champions Trophy Breda 2018 in the Netherlands against Argentina.#IndiaKaGame #HCT2018 #INDvARG

16:00 IST: The second quarter is underway. Who will take the lead?

15:54 IST: Manpreet Singh is escorted off the field due to an injury

15:51 IST: What a save from Sreejesh. Brilliant work from him.

10' SAVE! @16Sreejesh is dependable as ever as he saves the shot with his left hand.

15:49 IST: Another shot from Surender but he smashes the ball onto the fence.

15:48 IST:Chance for India. A superb forehand from Surender but Mandeep fails to collect the ball.

15:46 IST: A slow start to the game. Both teams exchanging possession in the midfield.

15:42 IST: Umpire has gone upstairs for referral. It's FREE HIT for India.

A big shout out goes to Sardar Singh, the seasoned midfielder of the Indian Men's Team, as he reaches a milestone of 300 appearances with the national side during their second match of the Rabobank Men's Hockey Champions Trophy 2018 against Argentina on 24th June.#IndiaKaGame pic.twitter.com/0le3ReUYIi

15:40 IST: SV Sunil runs with the ball but the Argentine defence is so strong.

15:33 IST: Sardar Singh is waving at the crowd. What an atmosphere. Fans are cheering for the India legend.

15:32 IST: The two teams  - India and Argentina - are waling out. What a moment for Sardar Singh.

15:31 IST: Huge support for Indian team in the stadium. Fans are eager for another spectacular show from the Indian team.

15:28 IST: Sardar Singh all set for his 300th cap for Team India. Historic moment for the legend.

Here are the 11 players of the Indian Men's Hockey Team who will start the proceedings in their game against Argentina at the Rabobank Men's Hockey Champions Trophy Breda 2018 in the Netherlands on 24th June 2018. #IndiaKaGame #HCT2018 #INDvARG pic.twitter.com/KqBp8oOak0

15:26 IST: Here are the 11 players of the Indian Men's Hockey team who will start the proceedings in their game against Argentina.

Here are the 11 players of the Indian Men's Hockey Team who will start the proceedings in their game against Argentina at the Rabobank Men's Hockey Champions Trophy Breda 2018 in the Netherlands on 24th June 2018. #IndiaKaGame #HCT2018 #INDvARG pic.twitter.com/KqBp8oOak0

15:15 IST:Hello and welcome to the Live coverage of Champions Trophy Hockey 2018 match between India and Argentina.

The Indian Men's Team will play against Argentina in their second match of the Rabobank Men's Hockey Champions Trophy Breda 2018 on 24th June. Tune in to @StarSportsIndia 1/ 1HD and @hotstartweets at 3:30 PM (IST) to watch the action LIVE!#IndiaKaGame #HCT2018 #INDvARG pic.twitter.com/q7MTenuU4v

India missed yet another chance in the following minutes when forward Dilpreet's quick-fire assist to Ramandeep was not trapped properly. In the 26th minute, Ramandeep made up for this missed opportunity when he won India a much-needed 1-0 lead when he picked up a brilliant assist from Simranjeet Singh. The goal was set-up by Sardar Singh's brilliant pass that pierced through the midfield to find Lalit at the top of the circle who eventually passed it to Simranjeet. Ramandeep positioned in front of the Pakistani goalkeeper kept it low to deflect it past Butt into the goal.

Pakistan upped their tempo in the third quarter, playing an improved structure compared to their previous outings against India at the 2018 Commonwealth Games and Asia Cup last year. Pakistan even found an equaliser at the start of the third quarter but the goal was disallowed after Harmanpreet's smart decision to take the video referral. The ball had rolled off Pakistani attacker's leg before Ali Shan put it past Sreejesh.

Desperate for a goal, Pakistan stretched the Indian defence and this time it worked with the Shafqat Rasool winning Pakistan their first PC of the match. A brilliant rush-in by Amit Rohidas ensured dragflicker Mubashar Ali did not equalise. Leading 1-0 at the start of the final quarter, India upped their ante in attack to find three splendid breakthroughs in the 54th, 57th and 60th minute through young forwards Dilpreet, Mandeep and Lalit.

India's second goal scored by Dilpreet was set up deep at the back when defender Surender Singh's stupendous tackle snatched the ball from Pakistan. It was Simranjeet who carried the ball in the midfield and once again made an effective assist with a perfect pass to Dilpreet who held his nerves to beat Imran Butt to the goal. With Pakistan pulling out their goalkeeper, Mandeep broke no sweat as he flipped the ball into the post in the 57th minute as the Indians went on a rampaging finish capitalising on their high fitness levels to keep up the speed and dented Pakistan's defence. Mandeep later assisted Lalit who scored on the whistle to end India's opening match with a superb 4-0 win.

Comments
Topics mentioned in this article
India Hockey Live Blogs
Get the latest updates on Olympics 2020, Olympics 2020 Medal Tally, Live Cricket Score . Like us on Facebook or follow us on Twitter for more sports updates. You can also download the NDTV Cricket app for Android or iOS.