India ended the round robing stage unbeaten and topped the points table with 13 points. 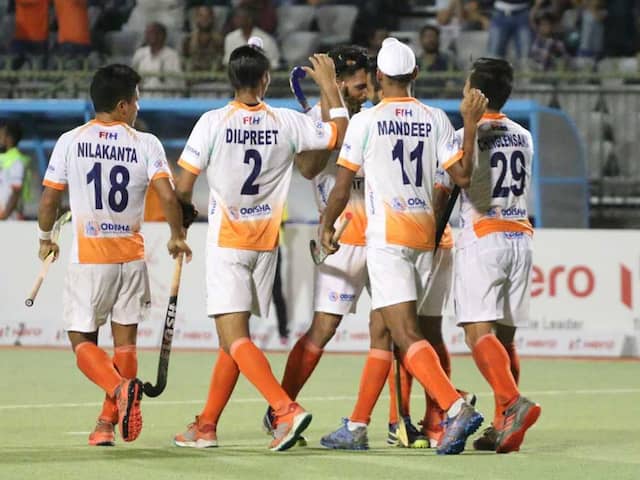 Harmanpreet Singh scored a hat-trick to hand defending champions India a thumping 4-1 victory over South Korea. India ended the round robin campaign unbeaten, winning four out of the five matches with their only blip coming in a goalless draw against Malaysia at the Asian Hockey Champions Trophy in Muscat, Oman. On Wednesday, Harmanpreet opened the scoring for India in the fifth minute with a firm drag-flick and returned to score two more goals with rasping dragflicks in the 47th and 59th minutes to become the tournament's third player to score three goals in one match.

India's Dilpreet Singh and Pakistan's Aleem Bilal are the other players to have registered hat-tricks in the tournament so far.

Besides Harmanpreet, Gurjant Singh scored a fine field goal for India in the 10th minute. For South Korea, Lee Seungil scored a brilliant field goal in the 20th minute.

India finished top of the standings with 13 points from five outings with an impressive goal difference of 27.

After a goalless draw against Malaysia on Tuesday, the Indians started on an attacking note against the South Koreans from the opening whistle.

India maintained possession in the opening few minutes and earned their first penalty corner in the fifth minute which was fiercely struck in the top right corner by Harmanpreet.

Thereafter, South Korea seemed content in sitting back and maintaining a compact structure, which made it difficult for the Indians to break through but in the ninth minute striker Akashdeep Singh had a chance to score but his shot blazed over the crossbar.

India, ranked No.5 in the world, doubled their lead through a counter-attack. Harmanpreet found Gurjant inside the South Korean circle with a precise long pass, and the young striker made no mistake by making a turn and shooting the ball into the top left corner with a reverse hit.

India started the second quarter with some high pressing again but it was South Korea's turn to open their account in the 20th minute against the run of play. A clearance by Surender Kumar was intercepted by a Korean player and passed onto Lee Seungil on the right side of the Indian circle, and the Korean captain struck a vicious shot from a tight angle to beat PR Sreejesh.

Both teams had their chances before the half-time but neither could produce the goods in the final third as India enjoyed a 2-1 lead at the halfway mark.

The third period started on an anxious note for India as the South Koreans scored inside 29 seconds, but the goal was disallowed after a successful referral by the Indian team.

Both teams battled for possession throughout the third quarter but could not find any opening.

Harmanpreet extended India's lead in the fourth quarter by converting his second penalty corner. South Korea tried to make a comeback after being awarded a penalty corner in the 54th minute, but Indian reserve goalkeeper Krishan B Pathak made a great reflex save to deny Jang Jonghyun.

India made sure that they rotated possession well in the final few minutes and secured another penalty corner in the 59th minute when striker Mandeep Singh was blocked by a Korean defender inside the circle. Playing with a kicking back for the final few moments, South Korea could not effectively defend the set piece as Harmanpreet scored to complete his hat-trick and secure three points for India.