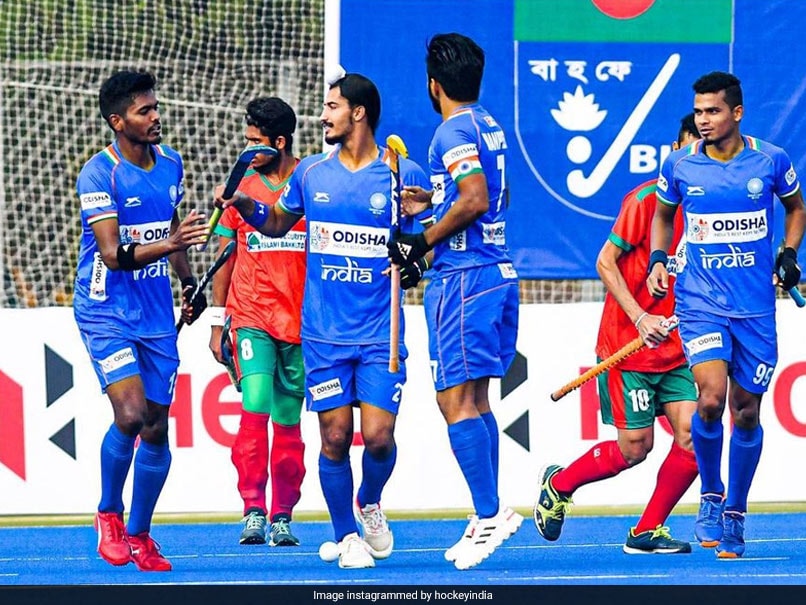 Striker Dilpreet Singh struck a hat-trick as defending champions and Tokyo Olympics bronze medallist India thrashed hosts Bangladesh 9-0 to register their first win in the Asian Champions Trophy men's hockey tournament on Wednesday. Dilpreet (12th, 22nd and 45th) scored three field goals for India, while Jarmanpreet Singh (33rd, 43rd) struck a brace from penalty corners. In between, Lalit Upadhayay (28th) deflected in a variation from vice-captain Harmanpreet Singh's flick from a penalty corner. Akashdeep Singh (54th) also found the net from a field effort before Mandeep Mor scored his debut goal for the country from a set piece in the 55th minute.

If that was not enough, Harmanpreet also put his name on the score-sheet, perfectly converting India's 13th penalty corner in the 57th minute.

Playing their first tournament with some new players after the historic Tokyo Olympics campaign, the Manpreet Singh-led India had earlier drawn 2-2 against Korea in their tournament opener on Tuesday.

India will next play arch-rivals Pakistan in the round-robin stage on Friday.

Held to a draw by Korea in their lung-opener, the Indians came out with purpose against lowly Bangladesh and controlled the proceedings in the entire first two quarters.

From the onset, India attacked constantly and in the process secured as many as eight penalty corners but could make use of just one.

Bangladesh's stout defending could be gauged from the fact that India secured as many as eight penalty corners in the first 12 minutes but the Olympic bronze-medallists failed to breach the opponent's backline.

Seconds later, Dilpreet finally gave India the lead with a field strike after receiving a pass from skipper Manpreet from outside the circle.

The second quarter continued in the same vein and India doubled their lead courtesy a defensive lapse from Bangladesh.

Bangladesh skipper Ashraful Islam was at fault as his wayward pass inside their own circle resulted in a free hit for India and Sumit Walmiki was quick to spot an unmarked Dilpreet inside the circle. The alert striker beautifully received the ball and slammed it into the far post with a reverse hit.

In the 28th minute, India tripled their lead when Lalit deflected in Harmanpreet's variation from a penalty corner.

India extended their lead minutes after the change of ends when Jarmanpreet scored from a penalty corner.

Jarmanpreet was bang on target from another penalty corner variation in the 43rd minute before Dilpreet scored his third goal of the day two minutes later.

The match was a completely one-sided affair as India mounted attacks after attacks on the Bangladesh goal.

Back into the team after being ignored from the Tokyo Olympics squad, Akashdeep answered his critics with a beautiful reverse hit field strike in the 54th minute.

A minute later, Mandeep scored his first goal for the country and Harmanpreet rounded off the tally for India in the 57th minute by converting a penalty corner.