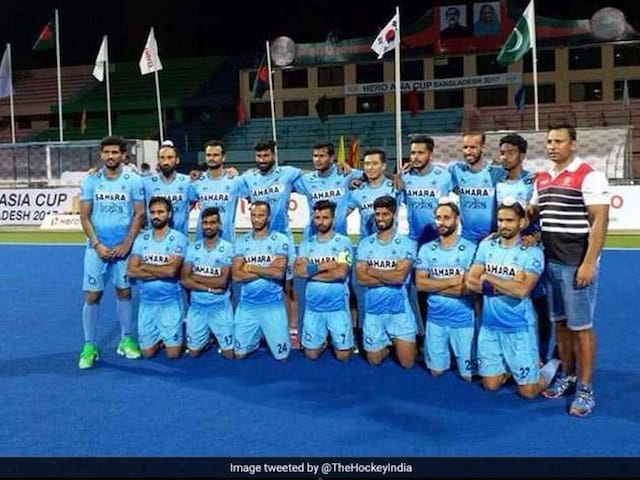 Clinical India thumped a high flying Malaysia 6-2 in their second Super 4s match of the Hero Asia Cup Hockey match in Dhaka on Thursday. From the start of the game, India looked confident as they made repeated attacks on the Malaysian defence. After registering a big victory, India go on top with four points. India will next play Pakistan, whom they had defeated 3-1 in the pool stage of the tournament. In the other match of the day, South Korea played out a 1-1 draw with Pakistan.

Catch all the highlights of the Asia Cup Hockey match between India vs Malaysia in Super 4s:

18:50 IST: Thank you for joining us for the live blog. Do tune back in on October 21 when India take on Pakistan for their third and final Super 4s match.

FT! India put forth a towering performance to blaze past Malaysia in the Super 4s clash of the #HeroAsiaCup 2017 (Men) on 19th Oct.#INDvMAS pic.twitter.com/uze80H1fi5

18:41 IST: With just minutes left in the game, Malaysia gets a penalty corner but Akash Chikte denies them a goal, yet again.

18:35 IST: Another penalty corner for Malaysia and another save from Chikte. Brilliant stuff from the Indian keeper.

18:32 IST: Goal scorer Razie Rahim gets a penalty corner for his team. Rahim fires the ball in but Chikte saves one for India, brilliant keeping.

18:27 IST: Goal! Penalty corner for Malaysia and Razie Rahim (PC) scores the first goal for Malaysia in the 50th minute.

50' Goal! Malaysia pull one back through Razie Rahim with just about 10 minutes on the clock.
#INDvMAS #HeroAsiaCup

18:21 IST: India take 5-0 lead against Malaysia at the end of the third quarter.

18:16 IST: Malaysia get a penalty corner once again in the game but fail to convert it into a goal, courtesy Indian defence.

18:14 IST: GOAL! SV Sunil dives in front the of the goal and deflects the ball inside the goal as India take 5-0 lead against Malaysia.

18:05 IST: GOAL! Akashdeep Singh cuts in from the right flank and chips the ball over the defender to Gurjant Singh, who guides the ball in the post for India's fourth goal.

33' GOAL!! Superb cross by @akashdeeps985 & Gurjant Singh does the rest as India continue to dominate in Q3!
#INDvMAS #HeroAsiaCup pic.twitter.com/pKXdr5FE27

17:52 IST: India have dominated the game so far, they lead 3-0 against Malaysia at the end of the second quarter.

HT! A splendid effort by Team India to bag an impressive 3-goal advantage over Malaysia in the Super 4s on 19th Oct!#INDvMAS #HeroAsiaCup pic.twitter.com/DYewngHueT

17:35 IST: GOAL! Ramandeep takes a shot but it is deflected to Uthappa, who fires it inside the goal post. India dominating the proceedings at the moment.

19' GOAL! It's @13harmanpreet once again who does it for India with a ferocious drag flick!
#INDvMAS #HeroAsiaCup

17:34 IST: India receive a penalty corner, will they extend their lead?

17:33 IST: Brilliant job from the Indian defenders to deny Malaysia an equaliser.

17:31 IST: Malaysia get a chance in the second quarter but fail to capitalise.

15' .
An enterprising Q1 comes to a close with India in the lead on the back of @akashdeeps985's Field Goal.#INDvMAS #HeroAsiaCup pic.twitter.com/4vxChLdyha

17:26 IST: GOAL! Akashdeep receives the ball with a defender on his back, turns quickly and fires the ball in the back of the net, gives India a lead in the first quarter..

17:21 IST: Brilliant ball in from the left flank but SV Sunil fails to connect the stick to the flashing ball as Malaysian keeper Kumar gets a little deflection.

​17:20 IST: Malaysia is continuously testing the Indian defence and the latter is stepping up to the occasion.

17:13 IST: India get a penalty corner and would like to take an early lead in the game. But, India makes a mess of it.

17:11 IST: Few minutes in the first quarter and Malaysia is already looking threatening. Malaysia attack India from the left wing, and make a circle entry,  but the defender make a good clearance.

17:10 IST: Umpire blows the whistle and Malaysia start the proceedings.

17:05 IST: Game time! Both teams are on the field and respective national anthems are being played.

A look at India's Starting XI for their duel vs Malaysia in the #HeroAsiaCup 2017 (Men) on 19th Oct.
: Star Sports First/2/HD2 & Hotstar pic.twitter.com/fiR1cSyffk

16:33 IST: Here is the last minute equaliser from Gurjant Singh against Korea.

#ICYMI: Watch Gurjant Singh's dramatic late equaliser over Korea and much more in the #HeroAsiaCup 2017 (Men) on 18th Oct.#IndiaKaGame pic.twitter.com/M5GgIqMMR9

16:31 IST: After advancing to the Super 4s with all win record, India survived a scare in their last match against Korea. But Gurjant Singh salvaged India with a last minute equaliser, which helped his team maintain an unbeaten streak in the tournament so far.

16:30 IST: Hello and welcome to the live blog of the match between India and Malaysia.

The Indian strike force comprising Ramandeep Singh, Akashdeep Singh, Lalit Upadahay and Chinglensana Singh has been the most impressive, scoring field goals at will with their deft stick work. India's last Super 4 match is against arch-rivals Pakistan, whom they have defeated 3-1 in the pool stages. As per the tournament rules, the top two teams from the Super 4 stage will qualify for the final to be held on Sunday.

Comments
Topics mentioned in this article
India Malaysia Live Blogs Hockey
Get the latest Cricket news, check out the India cricket schedule, Cricket live score . Like us on Facebook or follow us on Twitter for more sports updates. You can also download the NDTV Cricket app for Android or iOS.