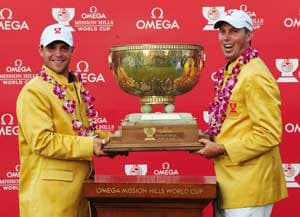 And they did so with a text message of inspiration from US golfing great Phil Mickelson.

"I got a text message earlier this morning from Phil Mickelson saying, 'Go make some birdies early, you guys can win this thing, and bring another one home for the United States'", world number 10 Kuchar said.

The Americans took Mickelson's advice, and grabbed the advantage from an Irish tailspin as tournament favourites Rory McIlroy and Graeme McDowell endured a sloppy final day at Mission Hills in southern China.

"We really clicked. It's fantastic to win for the US," said an ecstatic Woodland on the last day of the tournament, which was overshadowed by tough words from the president of the title sponsor that threw its future into doubt.

On the greens, Kuchar was in sublime form, helping the pair hole six birdies to finish top of the leaderboard on 5 under 67 and 24 under overall.

"For Gary and I to put our name on this trophy, on the World Cup trophy, alongside of Arnold Palmer, Jack Nicklaus, Gary Player, Tiger Woods and David Duval - the list goes on and on - it's a real honour," said a proud Kuchar.

It is Kuchar's first team event since his inclusion in the US Team victory at the President's Cup in Melbourne earlier this month.

The pair kept their nerve during a tight and thrilling front nine to build a two-point lead over the chasing Germans, world number-four Martin Kaymer and Alex Cejka at the halfway stage.

Germany claimed joint second with a resurgent England on 22 under overall.

England's Ian Poulter and Justin Rose accelerated up the leaderboard thanks to their late rally, holing eight birdies and an eagle.

McIlroy and 2010 US Open champion Graeme McDowell led the field from round two but finished tied fourth with Australia, Scotland and the impressive Netherlands on 21 under overall.

World number-two McIlroy missed several putts and fluffed another crucial 25 footer on the 18th which would have given Ireland a share of the runners up cheque in the US$7.5 million tournament.

The president of the title sponsor, Omega's Stephen Urquhart, put a damper on the last day of the tournament however.

He said he was unhappy with the strength of the field, after just a token number of top players opted to represent their countries in the 28-nation team event.

For the World Cup to become a respected tournament, he said it had to be staged around the world like football, rugby, cricket and other sports with World Cup events.

"China is too immature a market to put the World Cup where it should be. It's too early for China to support by itself a tournament on this scale," Urquhart said .

The stinging criticism is a blow for the tournament organisers, Hong Kong brothers Kenneth and Tenniel Chu and their Chinese government backers.

The Chus have poured in millions of dollars to build the five-star Mission Hills resort on Hainan Island in the belief it will become the "World Cup Headquarters" until 2025 when their contract ends.

They said they "would go it alone" to keep the competition in China and are in talks with tour chiefs about changing the format to make it more appealing to top players.

Urquhart denied Omega was planning to pull out of the tournament it has sponsored since 2007, which now takes place every two years to fit around the Olympics following the sport's inclusion as a Games discipline from Rio 2016.

But he said: "This is the last World Cup in this format which we are committed to... I can't say now that... in November 2013, we will be in this place or that place."

Comments
Topics mentioned in this article
Golf United States Matt Kuchar
Get the latest Cricket news, check out the India cricket schedule, Cricket live score . Like us on Facebook or follow us on Twitter for more sports updates. You can also download the NDTV Cricket app for Android or iOS.