The former world number one, also trying to play his way into the US PGA Tour's FedEx Cup playoffs, began the day tied for the lead at 11-under par. 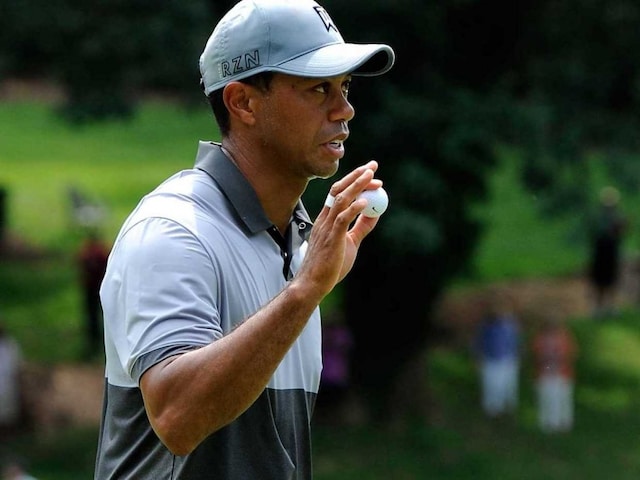 Tiger Woods kept his bid for a first title since 2013 on track on Saturday with a two-under par 68 that left him two shots behind third-round leader Jason Gore at the Wyndham Championship.

The former world number one, also trying to play his way into the US PGA Tour's FedEx Cup playoffs, began the day tied for the lead at 11-under par.

He arrived at Sedgefield Country Club's 18th hole in sole possession of second place on 14-under, but a bogey at the last saw him drop into a three-way tie for second behind Gore -- who carded an eight-under par 62 for 195.

Woods was joined on 197 by Sweden's Jonas Blixt, who fired a 62 and American Scott Brown, who signed for a 66.

"I need to go out there tomorrow and make a run and get myself up there and make some birdies," said Woods. "There's a bunch of guys ... at 13 (under).

The resurgent Woods -- coming off a missed cut at the PGA Championship that marked his third straight early exit from a major championship -- drew huge crowds on Saturday and he didn't disappoint.

He opened with a birdie at the first hole to briefly take the outright lead.

By the time he birdied the fifth, he was tied for the lead with Blixt on 13-under.

Woods slid a 12-foot birdie attempt just past the hole at the sixth -- one of several birdie chances that failed to drop.

He also made several good par saves, including a 16-footer at the 10th.

"The putter just felt really good," Woods said. "My pace, I felt like I could be aggressive."

He rolled in a 12-footer for birdie at 16 to move within one shot of the lead, and made another par save with a testing four-foot downhill putt at 17.

"I felt very steady from the word go," said Woods, seeking an 80th US PGA Tour title but his first since the 2013 WGC Bridgestone Invitational.

But at the 18th, Woods rolled his long first putt past the hole, and saw his par-saving attempt from seven feet circle the cup and fail to drop for his only bogey of the day.

Even with that blemish, Woods posted a third straight round in the 60s for the first time this season, during which he has struggled to see the swing changes he's made pay dividends.

Playing in just his 11th event of the year, Woods likely needs to win to qualify for the first event of the playoffs, next week's Barclays.

A solo second-place finish might also give him a chance -- depending on other finishers.

He'll be in the penultimate pairing on Sunday, ahead of Blixt and Gore -- who birdied four of his last seven holes to grab the lead.

Tom Hoge, who shared the overnight lead with Woods, carded a two-over 72 to drop into a tie for 21st.

Gore goes into the final round looking to add a second career win 10 years after he captured the 2005 84 Lumber Classic.

But Gore was able to spare a thought for Woods even as he focused on ending his own drought.