Five days after revealing that he is dating US ski star Lindsey Vonn, the 37-year-old American put himself in position to overtake top-ranked Rory McIlroy by capturing the $6.2 million event. 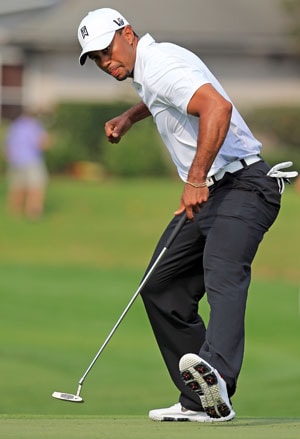 Tiger Woods, set to return to the World No. 1 ranking with a victory, fired a six-under par 66 Saturday to seize a two-shot lead after the third round of the US PGA Arnold Palmer Invitational.

Defending champion Woods sank 17 of 18 putts within 20 feet of the cup to finish 54 holes at Bay Hill, where he already has won seven titles, on 11-under par 205.

"I played actually halfway decent, hit a lot of good shots," Woods said. "Made a few putts. That was the key today. I was very pleased with how I played."

Woods made five birdies, a bogey and an eagle at the par-5 16th to grab the lead, with England's Justin Rose and Americans Rickie Fowler and John Huh sharing second on 207.

Woods, who has won 50 times in 54 tries when holding the lead entering the final round, seeks his 77th career PGA triumph -- five shy of matching Sam Snead's all-time record -- in his final tuneup event for next month's Masters.

Five days after revealing that he is dating US ski star Lindsey Vonn, the 37-year-old American put himself in position to overtake top-ranked Rory McIlroy by capturing the $6.2 million event.

Woods, a 14-time major champion chasing the all-time record of 18 majors won by Jack Nicklaus, has spent a record 623 weeks atop the world rankings.

But Woods has not paced the rankings since October of 2010 after injuries and an infamous sex scandal saw him stumble from the top 50.

Woods has won five titles in the past 12 months, a run that began at Palmer's event last year when he won his first PGA title since the sex scandal. This year, Woods has already collected triumphs at Torrey Pines and Doral.

Woods would become the first player to win the same PGA event eight times with a triumph on Sunday. He is already the first to win eight times at the same course after seven PGA titles and the 2008 US Open crown at Torrey Pines.

With seven titles each at Bay Hill and Firestone and eight wins at Torrey Pines, Woods has dominated multiple events like no player in PGA history. He has never lost a 54-hole lead on any of those favorite courses.

Woods said the greens became bumpier as the day wore on.

"They were holding," Woods said. "There were a lot of spike marks up there. It was kind of bouncy."

An example was the 15th green, where Woods said, "I had 'Mount Everest' in my line there. I had to go around it and had dying speed to just drop it in."

Woods began the day four strokes off the pace. He birdied the par-5 fourth and sixth holes, dropping an eight-foot birdie at six. He gave himself a two-footer for birdie at the par-3 seventh and made that.

After starting the back nine with a birdie thanks to an approach from 115 yards that stopped inches from the cup, Woods took his only bogey at the par-4 13th.

Staring at another bogey from a greenside bunker at the par-3 14th, Woods landed his bunker shot inches from the cup to save par, then followed with a 17-foot birdie putt at 15.

At 16, Woods smashed his second shot 183 yards and drained a 19-foot eagle putt to seize the lead.

Woods made another sand save at 18, a hole he had bogeyed in each of the first two rounds. After finding a fairway divot and then a bunker, Woods blasted out and holed a nine-footer for par.

Rose, who began the day with a share of the lead, started strong with two birdies and an eagle in the first four holes but took a bogey at the seventh and made four more bogeys against a lone birdie coming in.

Fowler, 24, had six birdies, including three at par-5s, his 67 putting him in Sunday's final group with Woods.

Huh, 22, birdied the 17th on his way to a 71. He just missed becoming the first player since Davis Love in 1999 to birdie the 18th hole in the first three rounds, off an inch to the right from 16 feet.