Tiger Woods shook off a short weather delay and survived a close encounter with a security guard to put himself one shot off the lead midway through the Masters. 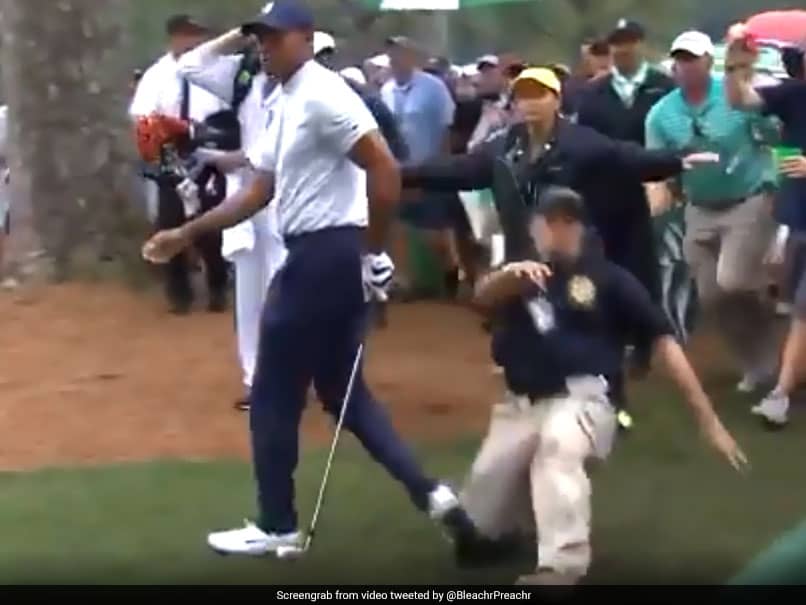 Tiger Woods survived a hairy moment when a security guard slipped and slid into his right foot.© Twitter

Tiger Woods pulled off a miracle recovery shot and sank some monster putts to put himself one shot off the lead midway through the Masters. However, Tiger Woods' march in Friday's second round could have so easily been derailed after a close encounter with a security guard. With rain still falling at the Augusta National Golf Club, Woods headed toward the green at 14 and a security guard, seemingly in a rush to keep the crowds behind the American star, slipped on muddy ground and slid into Tiger Woods's right foot, causing a few fearful moments before the superstar tested his ankle and walked on unharmed.

One fears for the security guard after this slide tackle on Tiger Woods pic.twitter.com/ZirRAiF48d

The video of the freak accident went viral on Twitter with fans coming up with hilarious memes. Here are some of them:

Breaking: authorities identify man who attempted to slide tackle Tiger Woods. @ShooterMcGavin_ is being brought in for questioning. pic.twitter.com/AkA0CquZyt

Say what you want, but the security guy ALREADY had a knee stain prior to going into the @TigerWoods slide tackle. Perhaps he'd already sighted in on a lower quality golfer. Let's ask @realDonaldTrump - pic.twitter.com/kSaWz9Id4J

Found the guy who tried to slide tackle @TigerWoods pic.twitter.com/Xhc1Qv6qNK

Security guy with a textbook slide tackle from behind on Tiger Woods. #yellowcard #TheMasters #LiveUnderPar pic.twitter.com/t2XBB9g4xx

Speaking after the incident, Woods made light of the accident, saying "I've had galleries run over me".

"I've had galleries run over me," he said. "When you play in front of a lot of people, things happen. It is what it is."

There was better news, however, for Woods as the 43-year-old firmly put himself in the hunt for a historic 15th major title and fifth green jacket.

American superstar fired a dramatic four-under par 68 to share sixth place on six-under 138 through 36 holes, one stroke behind a record Masters lead logjam of five co-leaders -- all of them major winners -- on seven-under 137.

But their feats were all eclipsed by Woods, who signaled he would be a threat to capture his first major title since the 2008 US Open and first Masters title since 2005 -- astonishing after years of knee and back injuries that made him doubt if he would ever play competitively again.