World No. 34 Thongchai Jaidee, whose best British Open outing was a tied 13th finish in 2009, said he must continue to play smart golf if he is to inch his way up the leaderboard. 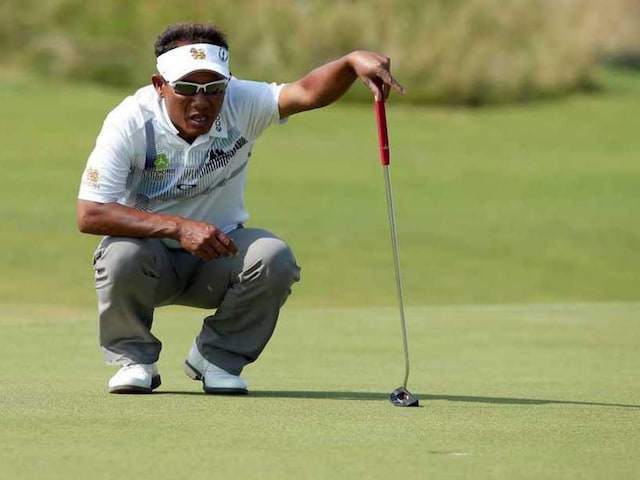 Thailand's Thongchai Jaidee lines up a putt on the 7th green during his second round, on day two of the 2014 British Open Golf Championship at Royal Liverpool Golf Course in Hoylake, north west England on July 18, 2014.© AFP
Hoylake, United Kingdom:

The 44-year-old Thai got off to a stunning start with three birdies in his first five holes at Royal Liverpool before his charge veered slightly off course as the famed links course finally bared its teeth. (Also read: McIlroy keeps lead as wind gets up at British Open)

Thongchai dropped five bogeys against two more birdies for a two-day total of 144 in the year's third major to lie alongside the likes of title holder Phil Mickelson five shots off the lead.

"I started really well on the front but struggled on the back nine. It was difficult to adjust as it got windy. Even the par fives, it was tough to play those holes. Anyway, it's a good round. Even par for both rounds, I'm happy to make the cut. That's the important thing," said Thongchai.

The world number 34, who won in Sweden for his second title on European soil last month, was delighted with the quality of his ball striking after struggling with his iron play in the opening round.

He is confident of closing the gap at the top as he seeks to extend his rich vein of form which includes two other top-five finishes in Germany and France recently.

"My performance was better than yesterday. In the wind, you just have to keep the ball in play which is quite difficult. It was very tough," said Thongchai, who enjoyed a chip-in birdie on his opening hole.

"Now that I've made the cut, we'll see how the weather is tomorrow and move from there. If it is bad (which is forecasted), you need to be patient and keep the ball on the fairways and greens."

Thongchai, whose best Open outing was a tied 13th finish in 2009, said he must continue to play smart golf if he is to inch his way up the leaderboard.

"There's no need to be long on this course, just avoid the bunkers. But it is difficult if the wind blows like today. On the last hole, I hit it good but still found the bunker.

"For me, I keep learning although I have spent a lot of time playing golf in Europe. It's good to be here for a major championship."

Comments
Topics mentioned in this article
Thongchai Jaidee Golf
Get the latest Cricket news, check out the India cricket schedule, Cricket live score . Like us on Facebook or follow us on Twitter for more sports updates. You can also download the NDTV Cricket app for Android or iOS.