Johnson didn't arrive at Muirfield until Monday morning after playing in the John Deere, where he made bogey on the 72nd hole and wound up losing in a three-man playoff. Nineteen-year-old Jordan Spieth captured the title on the fifth extra hole, becoming the youngest winner on the PGA Tour since 1931. 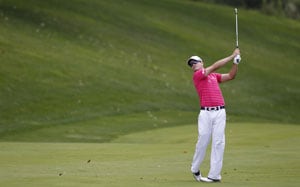 Zach Johnson seized the early lead at the British Open on Thursday, shooting a 5-under 31 on the front side only four days after losing the John Deere Classic in a playoff.

Among those already in the clubhouse, Spain's Rafael Cabrera-Bello posted a 4-under 67, fellow countryman Miguel Angel Jimenez got off to a blistering start on the way to 68, while 2004 Open champion Todd Hamilton put up a surprising 69 - his lowest round in the tournament since that improbable victory nine years ago.

"This game is a lot about confidence," said Hamilton, who now plays on a minor-league tour in the U.S. "I didn't really know what to expect. I hit a couple of drives early with the driver and made a few putts and that kind of settled me down, and I didn't try to do a lot of stuff that I didn't feel comfortable doing."

Johnson didn't arrive at Muirfield until Monday morning after playing in the John Deere, where he made bogey on the 72nd hole and wound up losing in a three-man playoff. Nineteen-year-old Jordan Spieth captured the title on the fifth extra hole, becoming the youngest winner on the PGA Tour since 1931.

If Johnson was still kicking himself over that result, it didn't show. The 2007 Masters champion made an eagle at the par-5 fifth, then birdied the next two holes to claim the top spot on the board.

The tournament began with the sun poking through big, puffy clouds along the Scottish coast. The forecast hardly seemed fitting for a British Open: mostly sunny with temperatures climbing.

There was a bit of a breeze at the course off the Firth of Forth - the wind is always the main line of defense for a links course - but not enough to be much of a problem.

"If the wind stays like it is, it's really not too difficult," Hamilton said. "If you can take advantage of the par-5s and throw some other birdies in, and stay away from the high numbers, I think somebody is going to shoot a good score."

Then there was Lloyd Saltman, a 27-year-old Scotsman who competes on the European Tour.

Playing in the first group of the day with Peter Senior and Oliver Fisher, Saltman sent his opening tee shot into a compound of hospitality tents far right of the fairway. He immediately reached for another ball, teed it up again, and knocked another one out of bounds. Finally, with his third attempt and taking what was officially his fifth shot of the hole, he got one in the fairway. He wound up taking a quadruple-bogey 8 and finished with a 79.

Saltman wasn't the only one who had trouble at No. 1. Promising young American Brooks Koepka also opened with an 8. Bud Cauley and Chris Wood both walked away with 7s.

Tiger Woods is the overwhelming favorite, as always. But the world's top-ranked player is mired in the longest drought of his career in golf's premier events, a stretch of 20 tournaments going back to the 2008 U.S. Open.

"I feel very good about my game," said Woods, who had an afternoon tee time. "Even though I haven't won a major championship in five years, I've been there in a bunch of them where I've had chances. I just need to keep putting myself there and eventually I'll get some."

When Woods won his 14th major at Torrey Pines more than five years ago, he seemed a lock to break Jack Nicklaus' record of 18.

Now, it's not so certain.

A messy divorce, injuries and a swing change have chipped away at Woods' dominance. He's still the best player in the world, with four victories already this year on the PGA Tour, but he hasn't been able to finish the job on the biggest stages.

"The self-belief you have to have, maybe there's a little dent in there," said three-time Open champion Nick Faldo. "He hits the wrong shot at the wrong time, where before Tiger would hit the right shot at the right time."

Comments
Topics mentioned in this article
Golf Rafael Cabrera-Bello Phil Mickelson Shiv Kapur Zach Johnson Rory McIlroy Lee Westwood Tiger Woods
Get the latest Cricket news, check out the India cricket schedule, Cricket live score . Like us on Facebook or follow us on Twitter for more sports updates. You can also download the NDTV Cricket app for Android or iOS.