Texas Open: Rory McIlroy in hunt for victory, Horschel leads after Round 3

Jim Furyk carded a three-under 69 to move into a tie for second place, and two-time major winner Rory McIlroy remained in the hunt by posting a one-under 71 to get into a tie for fourth. 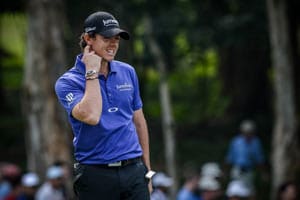 American Billy Horschel, who is seeking his first career PGA Tour victory, posted a two-under 70 to maintain a two-shot lead after the third round of the Texas Open on Saturday.

Horschel, who would also get an automatic berth into The Masters with a win in San Antonio, finished 54 holes at 10-under 206.

Horschel had to battle some windy conditions on Saturday.

"It was a good round," Horschel said. "I felt I hit the ball pretty well. With this wind you have got to stay patient. I did a good job of that so overall it was a good day."

Jim Furyk carded a three-under 69 to move into a tie for second place, and two-time major winner Rory McIlroy remained in the hunt by posting a one-under 71 to get into a tie for fourth.

Furyk is joined at eight-under 208 by Charley Hoffman who shot a 70.

McIlroy is tied with two others at six-under 210. That group also comprises Ryan Palmer (68) and Bob Estes (69).

McIlroy said if he can just clean up some inconsistencies in his game he has a shot at a victory on Sunday.

"It wasn't a very good bunker shot at the last," he said. "It could have been a couple of shots better but I am still in a decent position going into the last day. Hopefully I can make a run at it."

McIlroy added this event to his schedule at the last minute to finetune his game for next week's Masters.

Horschel said he is trying not to think about The Masters. The winner here receives a free pass into the first major championship of the season if they haven't already qualified.

"I can't allow those thoughts to get in my head. I can't forget about the task at hand," Horschel said.

Despite the breezy conditions, Furyk was able to get off to a quick start with two straight birdies. He also made birdie on the par-five No. 18. It was the third consecutive round Furyk birdied the opening two holes.

"I didn't have to scramble too much today," Furyk said. "I got off to a great start in the wind. I was able to get through the first three holes in two under."

Of the top 11 players on the leaderboard, only four are in the field next week for The Masters.

Comments
Topics mentioned in this article
Jim Furyk Rory McIlroy Golf
Get the latest Cricket news, check out the India cricket schedule, Cricket live score . Like us on Facebook or follow us on Twitter for more sports updates. You can also download the NDTV Cricket app for Android or iOS.