Meanwhile, Bhavik Patel, an American of Indian origin, carded a 69 after a first-round 68, and was tied seventh at five-under 137. 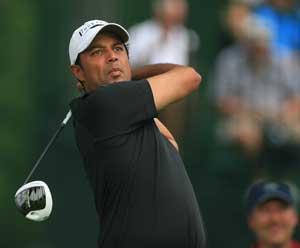 Daniel Chopra, who has a head cover depicting Yoda, the iconic character of Star Wars, carded a second successive three-under 68 to move to six-under 138 and into tied second even as Arjun Atwal missed the cut at the end of the second round of the Stadion Classic here.

The Indo-Swede Chopra, who lost his PGA Tour card last season, and is now playing on Web.Com and hoping to secure a PGA berth for 2014, is one of four players tied at 6-under alongside New Zealand's Tim Wilkinson (67-69), Americans Matt Bettencourt (69-67) and Brendon Todd (66-70).

Meanwhile, Bhavik Patel, an American of Indian origin, carded a 69 after a first-round 68, and was tied seventh at five-under 137.

Atwal, the only Indian winner ever on PGA, missed the cut after rounds of 75 and 71 as the cut fell at one-over.

Chopra may well have been in sole lead but for his double bogey on par-3 16th.

Chopra, a three-time winner on Web.com Tour and two-time winner on the PGA Tour, birdied the 18th for his second straight 68, while Bettencourt carded a bogey-free 67.

Wilkinson made three birdies and a bogey for a 69.

Chopra will be hoping for some better scores on the third day, which is also the Star Wars Day.

The conditions were rather demanding with winds and showers on a course that was playing tough already.

John Daly withdrew due to a shoulder injury.

Comments
Topics mentioned in this article
Arjun Atwal Golf
Get the latest updates on ICC T20 Worldcup 2022 and CWG 2022 check out the Schedule, Live Score and Medals Tally. Like us on Facebook or follow us on Twitter for more sports updates. You can also download the NDTV Cricket app for Android or iOS.