Shubhankar Sharma is four strokes adrift of Argentina's Emiliano Grillo, who fired four-under 68 to go with his course-record equaling seven-under 65 in the opening round to keep his stranglehold on the leaderboard. 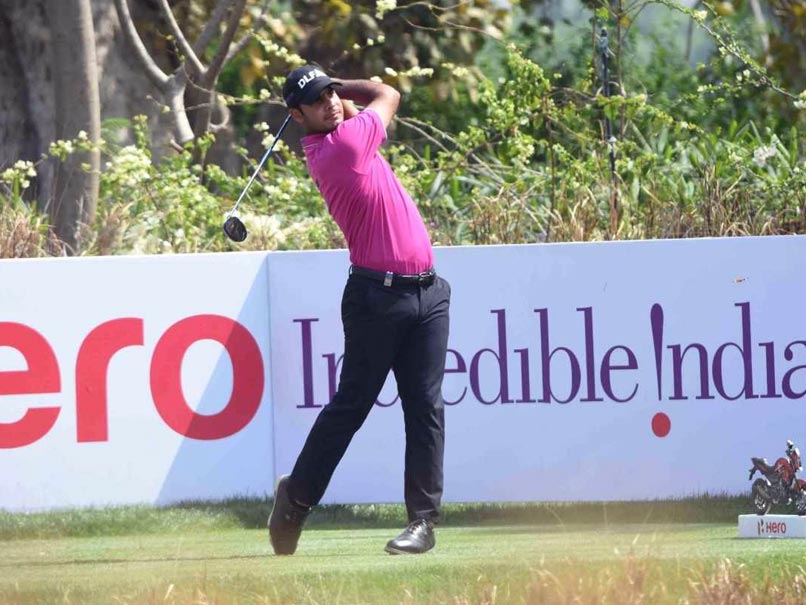 Shubhankar will be playing a practice round with 4-time major champion Rory McIlroy ahead of the Masters.© Hero India Open

Rising Indian golfer Shubhankar Sharma shattered the course record at the challenging DLF Golf course with a sensational eight-under 64 to surge to second place after the unfinished second round at the USD 1,750,000 Hero Indian Open on Friday. One-over after his first 18 holes yesterday, Shubhankar dropped just one shot at the seventh hole today and sank as many as nine birdies three on front nine and six on back nine -- to emerge as the best Indian in the field.

He is just four strokes adrift of Argentina's Emiliano Grillo, who fired four-under 68 to go with his course-record equaling seven-under 65 in the opening round to keep his stranglehold on the leaderboard.

Khalin Joshi, who secured his Asian tour card with a fifth place at Maybank Championship, brought home a flawless four-under 68 to move to tied 8th.

However, two-time defending champion SSP Chawrasia, who also has four runners-up finish to his name in this event, simply failed to read the course this time and bowed out with a horrendous 77 after a 74 yesterday.

Ajeetesh Sandhu, who was tied 7th yesterday, failed to negotiate the Gary Player layout and dropped three bogeys and two double bogeys to return with a 76 and slip down the leaderboard.

Former champion Arjun Atwal, who was one-under 71 yesterday, scored five-over 77 and three-time winner in 2017 Shiv Kapur (76, 72) are likely to miss the cut as they are four-over 148 after two days.

2015 winner Anirban Lahiri went one-over to go with a first-round 72, and former Indian champions Jyoti Randhawa (72) was even par at the 15th hole.

It was yet another low score for Shubhankar, who had scored 62 on the final round at Kuala lumpur to win the Maybank Championship last month. He had shot 62 to secure his card in the final round of the Manila Masters two years ago.

The 21-year-old from Chandigarh, who made his way to the top of the order of merit in Asian and European Tour after clinching the Joburg Open and Maybank Championship, rated his round as one among his top 5 so far.

It is up there within top 5, I have played many times here during practice and I am happy that I didn't make many mistakes today, said Shubhankar, whose exploits at the World Golf Championship-Mexico where he finished tied 9th finish earned him a chance to play at the Masters in April.

I knew about the course record so I went from it. I have hit a few low scores so I'm happy, added the Indian, who was also given a sponsor exemption into the Valero Texas Open in the PGA Tour.

Shubhankar, who would be playing a practice round with four-time major champion Rory McIlroy ahead of the Masters, said: If you would have told me yesterday when I was five over after nine holes that I would be seven under today, I would have laughed it off.

I feel great. I fought back yesterday I knew I am playing well so I didn't go for anything different. I didn't think about the back nine much, just looked to hit good shots, my putting was also good today.

Asked what would be his strategy in the weekend, Shubhankar said: I exactly know how that course behaves. I'll be aggressive tomorrow.

A contemporary of Jordan Spieth and Justin Thomas during their amateur days, Grillo, meanwhile, hit five birdies and one bogey to take his two-day total to 11-under 133.

I wasn't expecting to be 11-under. I was telling myself that I'll be in a good position if I can just shoot under par every day. Today I hit plenty of fairways and greens. Hopefully, I can find my putter a bit more tomorrow and I can keep climbing up the leaderboard, said Grillo, who won the 2015 Frys.com Open in the PGA tour.

With fading light, nine golfers couldn't finish the second round and would come back tomorrow to finish their round.