Big-hitting Australian Scott Hend came out top in his latest Macao Open Sunday shootout with Anirban Lahiri as he held off the Indian to win the Asian Tour title by three shots. 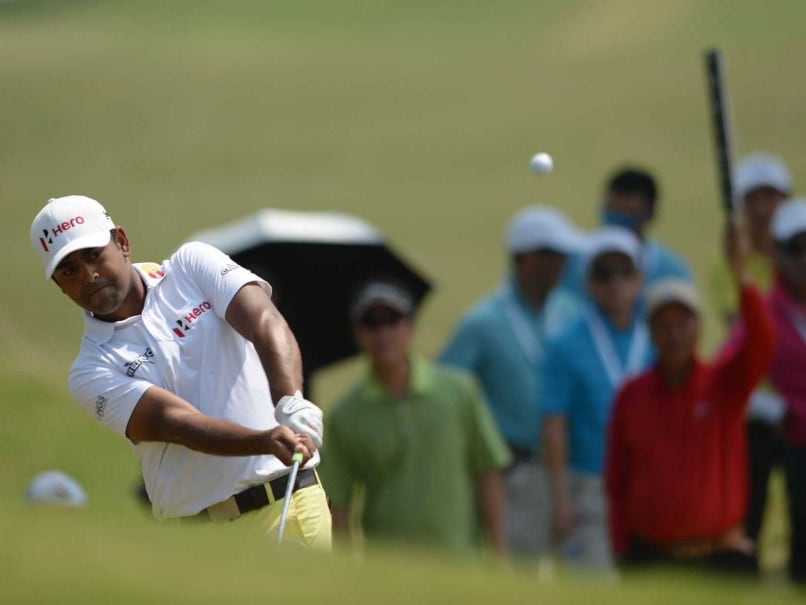 Anirban Lahiri tried to apply the pressure on Scott Hend with three birdies in the first six holes but the Australian was too good on the day with back-to-back birdies on eight and nine to preserve his overnight lead.© NDTV

Anirban Lahiri and Chiragh Kumar's determined approach did not quite work out as the long-hitting of Scott Hend maintained his composure with a five-under 66 to cruise to a three-shot lead at the Venetian Macao Open and regain the title that he won two years ago. (Read More in Golf)

As Hend ended at a superb 20-under 264, defending champion Lahiri (66) with seven birdies against two bogeys and his teammate Chiragh (65) with five birdies, an eagle and one bogey finished at 17-under 267 at the USD 1 million Asian Tour event.

The other Indians also had a fine day as Rashid Khan (71) was tied eighth at 10-under 274 and Gaganjeet Bhullar (70) was tied 17th, as was SSP Chawrasia (72), who dropped two doubles and two bogeys on his back nine, including a double, bogey and bogey finish.

Jyoti Randhawa (70) and Abhijit Chadha (75) were tied 45th at one-under and Rahil Gangjee had a horrendous day with 79 and finished tied-55th at one-over.

Lahiri tried to apply the pressure on Hend with three birdies in the first six holes but the Australian was too good on the day with back-to-back birdies on eight and nine to preserve his overnight lead.

The Indian made costly bogeys on 12 and 16 to fall out of the title chase.

"I can't be disappointed. I played well today barring a couple of really silly mistakes on the back nine, I played really good. All credit to Hendy. He played phenomenal golf. I was telling him that anytime you shoot a bogey free five unde when you're leading by three, you're not going to get caught very often. He's earned this win," Lahiri said.

"I felt I could catch him (but) I didn't make a putt on 11 and then I dropped a silly shot on 12, got unlucky with the drive and on 16, I shot myself in the head. I picked the wrong sprinkler head and picked myself a wrong yardage, so you don't make a mistake like that at that stage of the event. I played decent all week. Nothing to feel bad about.

"I should have brought a different lob wedge out for this week. I carried two wedges for most of the year but I decided to commit to the one with more bounce which is the one I've been using in the States. In Bermuda (grass), you need slightly different and I was ruing that I didn't have it," he added. It was sweet revenge for Scott Hend who was pipped by Lahiri last year.

Chiragh, who was runner-up at Hero Indian Open in 2011, made a vital last hole birdie to tie for second place, with the runner-up cheque of $86,500 securing his card for next year.

"Honestly, on this course and with Scott's length, it would have been tough to catch him. I did get off to a good start (with a birdie and eagle) and had I made one or two more putts early on, I would have put some pressure. He played really good," Chiragh, who was Lahiri's colleague on Indian team when they won a silver as amateurs in Asian Games in 2006, said.

It was sweet revenge for the 42-year-old Aussie who was pipped by Lahiri last year and he collected the winner's cheque of $180,000.

"Feel rewarded as I've worked hard the last few weeks in Europe," said Hend, who entered the last day with a three-shot cushion.

"I knew Anirban wasn't going to go away. He's a great player and I just went out there with the aim to shoot a good score as I knew they had to catch me. I can't really remember much about 2013 (his win). I remember more about last year where I didn't play solid down the stretch and Anirban got me. So this year, it is a different feeling."

Hend has now won seven times on the Asian Tour and will defend his UBS Hong Kong Open title next week.