Joint overnight leader Khalin Joshi battled to a 71 to end the day two strokes back in the USD 300,000 Asian Tour event, which is celebrating its sixth edition. 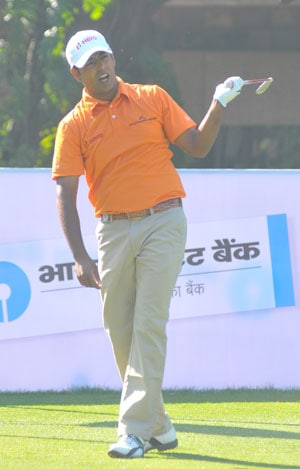 Defending champion Anirban Lahiri (in pic) conceded the top spot to Bangladeshi Siddikur, who was rock steady as he carded a third straight four-under-par 68 for a one-shot lead at the SAIL-SBI Open in New Delhi on Friday.

Siddikur put himself in prime position to win a second Asian Tour title after firing five birdies against a lone bogey at the Delhi Golf Club to take the lead from Lahiri, who birdied his last two holes for a bogey-free 66.

Joint overnight leader Khalin Joshi battled to a 71 to end the day two strokes back in the USD 300,000 Asian Tour event, which is celebrating its sixth edition.

Another local hope Rashid Khan was a further shot behind after also a 71.

Thailand's Chapchai Nirat and home hero Shiv Kapur will enter the final day four off the lead after rounds of 67 and 69, respectively, while American Chan Kim stumbled to a 74 to fall out of contention.

The 29-year-old Siddikur, the first Bangladeshi to win on the Asian Tour when he won the Brunei Open in 2010, was delighted to push ahead of the home favourites.

Siddikur's round was highlighted by a monster 40-foot birdie conversion on 16 but he said a par save on 18 after finding the punishing bushes was crucial as it kept his nose ahead of the holder, Lahiri.

"On 16, I tried to make just a two putt but it went it. It was a fluke. But I made a good save on 18, made a great up and down. Conditions are not easy. It's not finished until the last hole and last putt. This course is never easy but I'm looking forward to playing with Anirban as he's a good friend of mine," said Siddikur, who leads on 12-under-par 204.

The 25-year-old Lahiri, who started the day four behind, charged into contention with a superb display of ball striking as he hit 15 greens in regulation.

"It's the best I have played all week. I'm getting more comfortable on the greens. Just a couple of bad swings but I got away with pars which was important. Four putts kind of stood at the lip but I'm not going to complain as some fell for me in the end. I'm happy with where I am right now," said Lahiri, who is seeking a third Asian Tour victory.

"The last putt was a good putt. It was like a 10 or 12 footer and given the fact that I knew I was two shots back, I thought it was important to make that putt. I'm one shot closer to the lead now."

The talented Joshi, who is making his professional debut on the region's premier Tour, lost his way momentarily on his outward nine with three bogeys but fought back to stay in the hunt for a dream victory.

After slipping up in the second round with a 75, big-hitting Chapchai produced five birdies for an unblemished card to earn a shot at a second SAIL-SBI Open title, which he won in 2009 with a world record 32-under-par 256 aggregate.

Comments
Topics mentioned in this article
Anirban Lahiri C Muniyappa Siddikur Rahman Sujjan Singh Golf
Get the latest updates on IPL 2020, check out the IPL Schedule for 2020 and Indian Premier League (IPL) Cricket live score . Like us on Facebook or follow us on Twitter for more sports updates. You can also download the NDTV Cricket app for Android or iOS.