American John Huh parred the eighth hole of a playoff on Sunday to edge Australian Robert Allenby and capture the Mayakoba Golf Classic. 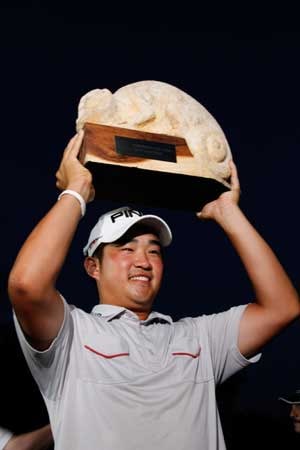 American John Huh parred the eighth hole of a playoff on Sunday to edge Australian Robert Allenby and capture the Mayakoba Golf Classic.

The 21-year-old PGA Tour rookie Huh parred all eight holes in a playoff that matched the second-longest in PGA Tour history behind the record of 11 set over 60 years ago.

"It's amazing," Huh said. "It's my rookie year, especially, and playing in my fifth event on the PGA Tour. I just couldn't put it in words. It's really hard to explain this. It's major. I mean, it was my dream."

The playoff switched between the par-four 18th and par-three 10th holes.

Cary Middlecoff and Lloyd Mangrum hold the record for the longest playoff when they were declared co-winners of the 1949 Motor City Open.

It also marked the first time since 1983 and the fifth playoff in history to go eight holes.

Huh fired a final round of eight-under 65 to reach 13-under 271 which put him into a tie with Allenby.

The 40-year-old Allenby appeared to be headed to a comfortable lead at the end of his round on the El Camaleon course as he had a two-shot cushion after 17 holes of regulation. But a double bogey on 18 helped set up the playoff with Huh.

"Obviously, disappointed, disappointed that I didn't like hit three-wood off 18 in regulation, like I should have," Allenby said. "But that's the way it goes. You make some mistakes sometimes, and that was a major one, obviously."

"I mean, I had this tournament in the bag, a two-shot lead with one hole to play and just played it like a rookie, pretty much."

Matt Every and Colt Knost finished two shots adrift in a tie for third after shooting 66s.

Chris Stroud tied for fifth at 10-under with Dicky Pride (66), Alejandro Canizates (66) and third-round leader Daniel Summerhays, who closed with a 73. Stroud was one shot back while teeing off on 18, but made a double bogey to finish his round with a 71.

Huh, who was playing in just his fifth PGA Tour event, posted a bogey-free final round that included a half dozen birdies and and an eagle on the par-five fifth hole.

He already has two top 12 finishes this year, including a tie for sixth at the Torrey Pines tournament near San Diego. He finished tied for 12th at the Phoenix Open.

Allenby was looking to snap a decade long winless streak on the USPGA Tour that dates back to the 2001 Pennsylvania Classic.

Comments
Topics mentioned in this article
Golf John Huh Robert Allenby
Get the latest Cricket news, check out the India cricket schedule, Cricket live score . Like us on Facebook or follow us on Twitter for more sports updates. You can also download the NDTV Cricket app for Android or iOS.