In the sweltering heat of 43 degrees celsius, Syed Saqib Ahmed birdied 10 holes on his way to the top of the leaderboard. 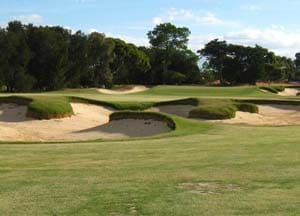 Bangalore-based Syed Saqib Ahmed shattered the course record with a scintillating round of 7-under par at the Jack Nicklaus Kalhaar Blues and Greens Golf Club here on Tuesday, which also saw two hole in ones by Chennai's Tarak Swamy and Shakti Singh of Delhi on the 16th.

In the sweltering heat of 43 degrees celsius, Syed Saqib Ahmed birdied 10 holes on his way to the top of the leaderboard.

Thailand-based Samarth Dwivedi, fresh from a second place finish last week, was tied second three strokes behind alongside amateur tour veteran Simarjeet Singh. Five other players finished under par alongside the leaders as Manu Gandas with a 69 was placed fourth and Udayan Mane, Viraj Madappa and babloo Yadav were all tied for the fifth place and the winner of the last leg Karan Taunk being in the eight position with a 71.

Syed Saqib Ahmed, who was the Junior Golfer of the Year in 2011 took to the task steadily. Having started from the 10th Tee, Saqib was even par after 6 holes before shifting gears and making eight birdies in the remaining 12 holes. The sparse crowd following the players were treated to the best ever round of golf seen at Kalhaar Blues & Greens.

Elsewhere on the course, there was more drama especially on the 16th hole which turned out to be a paradise for two golfers in particular, Tarak Swamy and Shakti Singh, both of whom aced the hole with a perfect tee shot.

With wind conditions almost negligible on Tuesday, we can hope for some more drama on Wednesday when they will have an impact on the playing conditions.