Jason Day, Rory McIlroy and Jordan Speith will be desperate to make a great start in the 80th edition of the Augusta Masters. 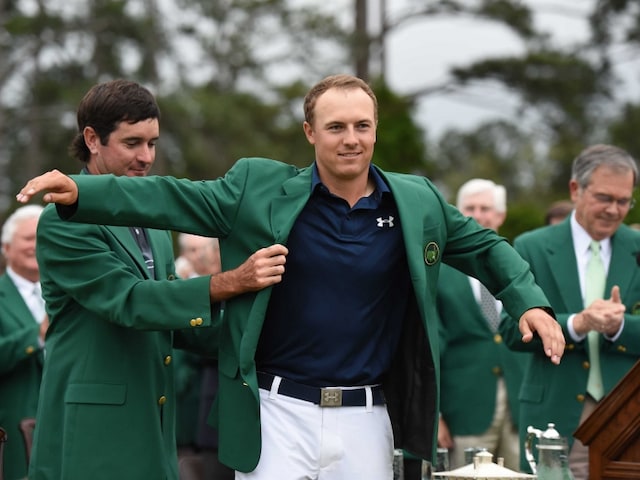 Jordan Spieth is the defending champion at the Augusta Masters and he will be facing stiff competition from Rory McIlroy and Jason Day.© AFP

Last man in will be the first man out when the 80th Masters gets underway at Augusta National on Thursday, with the new generation of Jason Day, Jordan Spieth and Rory McIlroy all keen on making strong starts. (Jordan Spieth, Rory McIlroy Ready for Masters Showdown)

At 38, Jim Herman won his first tournament in 106 tries at the Houston Open on Sunday to punch the last ticket into the first of the year's four majors.

He will have his moment in the spotlight as the first competitor to tee off shortly after Masters legends Jack Nicklaus and Gary Player perform their roles as honorary starters.

The big names will follow later in what is forecast to be a blustery and showery opening morning.

Defending champion Spieth is first in action at 9:48 AM local time in the company of England's Paul Casey and rising young US amateur Bryson DeChambeau.

The Texan won by four strokes last year with a record-matching 18-under par total and two months later he added the US Open crown.

World number one Day, looking to win back-to-back majors after his PGA Championship triumph in August, has an afternoon tee-time at 1:06pm, playing with Matt Kuchar and South African veteran Ernie Els.

McIlroy, making his second bid at becoming just the sixth player to win all four majors, is the last man out at 2:01pm with Ryder Cup teammate Martin Kaymer and Bill Haas.

Not an ideal spot to be, in but the Northern Irishman said he will take it in his stride.

"I think it's the third year in a row I've been off last either Thursday or Friday here. I was sort of expecting it," he said with a shrug.

In the injury-forced absence of four-time winner Tiger Woods, the biggest gallery could well be following three-time champion Phil Mickelson, who will be aiming to make it four at the age of 45.

At the Masters, age for him is not a factor.

"I don't feel old at all. I feel great," he said. "I guess maybe you hang around these young guys as much as I have been, you just feel young."

The five-time major winner will be off at 10:43am along with Australian Marc Leishman and Swedish threat Henrik Stenson.

Bubba Watson, Masters champion in 2012 and 2014, thinks he can make it another even-year triumph heading out at 12:44pm in the company of South Africa's Branden Grace and Ian Poulter of England.

At 35, the Australian is all too aware that the arrival of young guns such as Day, Spieth, McIlroy and Rickie Fowler means that it can only get harder for him to win a second major.

"I need to get my skates on because it's getting tougher and tougher every year. But I'm in good shape," he said.

The 80th edition of the tournament, which was first held in 1934, sees 89 players from 23 countries contesting the top prize and the honor of donning the green jacket that goes to each winner.

Comments
Topics mentioned in this article
Jason Day Rory McIlroy Jordan Spieth Golf
Get the latest Cricket news, check out the India cricket schedule, Cricket live score . Like us on Facebook or follow us on Twitter for more sports updates. You can also download the NDTV Cricket app for Android or iOS.