Furyk, whose lone major title came at the 2003 US Open, made a 14-foot birdie putt at the 17th hole and sank a 10-foot par putt from the greenside fringe at the 18th to finish a two-under par 68 and stand on nine-under par 201 after 54 holes at Oak Hill Country Club. 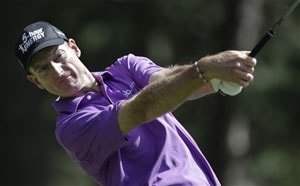 Jim Furyk sank long putts on the final two holes to grab a one-stroke lead over fellow American Jason Dufner after Saturday's third round of the PGA Championship.

Furyk, whose lone major title came at the 2003 US Open, made a 14-foot birdie putt at the 17th hole and sank a 10-foot par putt from the greenside fringe at the 18th to finish a two-under par 68 and stand on nine-under par 201 after 54 holes at Oak Hill Country Club.

"That was big," Furyk said of his par save. "It's a nice way to finish the day."

Dufner was one stroke back on 202 with Sweden's Henrik Stenson on 203, Swede Jonas Blixt fourth on 204 after the day's only bogey-free round at 66, and Masters champion Adam Scott sharing fifth with American Steve Stricker on 205.

Defending champion Rory McIlroy and England's Lee Westwood, seeking his first major title in his 62nd try after a fistful of near misses, were together in seventh on 207.

Furyk went bogey-bogey at the second and third holes but adjusted his putting stroke and bounced back with birdies at the par-5 fourth, then the eighth, 10th and 12th holes and after a bogey at the par-3 14th he birdied 17.

"The greens are a touch faster," Furyk said. "After those bogeys I told myself, 'I've got to readjust the machine from here on.' From there, it didn't really bother me."

Furyk owned the 54-hole lead in four tournaments last year but did not win any of them. His last victory came in the 2010 US PGA Tour Championship.

A day after Dufner torched a rain-soaked layout for a 63 to match the lowest round in major golf history, he could only manage a 71 in perfect conditions -- and even that required a six-foot par putt at 18 to curl around and drop in the back of the cup after rolling past the right edge.

"The putter let me down a little bit," Dufner said. "I've got to work on my pace. I'm leaving a lot of these putts short."

Dufner, who squandered a four-shot lead with four holes to play at the 2011 PGA Championship, led by two when the day began but took a double bogey at the fifth and followed a birdie at the seventh with a bogey at eight, then began the back nine with a birdie and parred his way in.

"There were a couple times when I was a little frustrated with things, a little perturbed, but you have to keep your head out there," Dufner said.

"It's important to stay even keeled for the most part. You have got to let things go in these majors and just plod along out there."

Stenson put himself in the fight for the lead with birdies at 13 and 14 but a bogey at 15 dropped him back.

"It was definitely trickier today," Stenson said. "We got a lot of breeze. It was tricky to know where it was coming from."

Blixt opened and closed his round with birdies, adding two others at the fifth and ninth holes. But his most epic shot came at the 18th when he put the ball off the tee into a spectator's hip pocket and went on to birdie the hole.

"It was very fortunate that he was standing where he was so I didn't have to deal with too many trees and stuff like that," Blixt said. "Hit a good 5-iron. I didn't know how to stop it and I tried to get it as close as possible to the pin. Got a lucky bounce up the hill and trickled to three feet."

Blixt won last month at the US PGA Greenbrier Classic to earn a berth into the year's final major.

Westwood liked his chances on Sunday after leading on the last day at last month's British Open but losing at Muirfield.

"Anything is possible on the last Sunday of a major," Westwood said. "I'm definitely hitting the ball better than I was at Murfield."

McIlroy, who has struggled much of the year, battled into contention with a birdie-birdie finish on a day when Oak Hill played havoc with much of the field.

"I probably made up three, three and a half shots on those last two holes," McIlroy said. "I've got another 18 to play and hopefully I can keep playing the way I am."

Oak Hill took its toll on hopefuls, however.

US Open champion Justin Rose of England fired a 77 to stand on 211. Matt Kuchar fired a 76 to land on level par. Spain's Sergio Garcia and Aussie Marcus Fraser stumbled back with 75s. Germany's Martin Kaymer shot 78 to finish on 214. England's Ian Poulter shot a 77 to land on 218.

World number one Tiger Woods fired a three-over par 73 for 214, dooming his bid for a 15th major title.

Second-ranked Phil Mickelson, who won the British Open three weeks ago, struggled to a 78 -- matching his worst-ever PGA Championship round.

Comments
Topics mentioned in this article
Tiger Woods Rory McIlroy Golf Jim Furyk
Get the latest Cricket news, check out the India cricket schedule, Cricket live score . Like us on Facebook or follow us on Twitter for more sports updates. You can also download the NDTV Cricket app for Android or iOS.