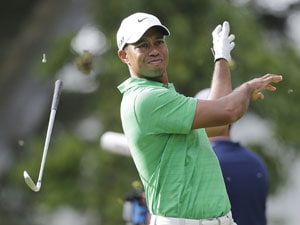 Graeme McDowell and Jim Furyk, a pair of U.S. Open champions, managed to beat par at The Olympic Club.

In the 33 times he has started a round atop the leaderboard at a major, Woods never had a tougher struggle with par than Saturday at the U.S. Open - a 5-over 75 that made his uphill climb to the majestic clubhouse overlooking San Francisco feel a lot longer.

Thanks to late birdies by McDowell and Furyk, it won't get any easier Sunday.

McDowell showed the kind of fight that won him a U.S. Open two years ago down the coast at Pebble Beach. He scratched out pars and finished with a 4-foot birdie putt that gave him a 2-under 68 and a share of the lead going into the final round at The Olympic Club.

"Probably for the first time this week, I actually enjoyed the round of golf," McDowell said.

Furyk, also bidding for another trophy from golf's toughest test, outclassed Woods in the final pairing with key bunker saves and an 8-foot birdie putt on the 17th for a 70, making him the only player who has yet to have a round over par.

They were at 1-under 139, the only survivors against par.

"Obviously, I like being up front in the position I'm in," Furyk said. "The golf course will take its effect on a bunch of people. And the guys that go out there and deal with the conditions and the situations the best ... those are the guys that are have some success and have an opportunity to win the last few holes."

Woods sure didn't look like one of those guys in the third round. Wearing a key lime shirt, he turned in a lemon.

He fell out of the lead with two bogeys in the first three holes, couldn't make a birdie on the stretch of holes that Olympic allows players to make up ground, and ended with a sloppy bogey on the 18th for a 75. Only eight players had a higher score.

It matched Woods' worst score when he at least a share of the lead after any round of a major, a 3-over 75 in the final round of the 2009 PGA Championship when he lost to Y.E. Yang.

"I'm just going to have to shoot a good round tomorrow, and post early and see what happens," Woods said.

All was not lost for Woods, not to mention another dozen or so players. In a U.S. Open that has lived up to its reputation, it was difficult for anyone to get too far ahead.

McDowell and Furyk were two shots ahead of Fredrik Jacobson, who had a 68. Another shot behind was a group that included Lee Westwood, whose Saturday-best 67 gave him another shot at his first major; and Ernie Els, who holed a long pitch for eagle on the 17th that carried him to a 68. The Big Easy is a two-time U.S. Open champion, with that first title coming 18 years ago.

"Experience helps around here," Els said. "For some reason, I'm patient again this week and that's been kind of my virtue in major championship golf, the ability to be patient and wait it out. And I think you're going to have to do that tomorrow."

Thirteen players were separated by four shots going into Sunday, a list that includes 17-year-old Beau Hossler, who followed bogeys with birdies for a 70.

Woods, who has never won a major from behind, was five shots back. His round ended with a shot from the middle of the 18th fairway that hung up in the right collar of rough, and a stubbed chip that took a hard turn to the left some 10 feet away.

When he two-putted for his sixth bogey, his day got a little worse. Climbing the hill toward the fabled clubhouse at Olympic, a photographer brushed past him and Woods banged his hand into the camera. He shook it several times, but later said he was fine.

The real hurt came from Olympic.

"It was just a tough day on the greens, and most of the day, I just kept getting that half-number, right in between clubs all day," said Woods, who was either well long or short on his approach shots.

Furyk, the only player who has not had a round over par in this championship, and McDowell played together in the opening two rounds. Both are similar players who appear to be a good fit for Olympic - control off the tee and a strong fight to avoid bogeys. McDowell referred to Furyk as a "plodder," which at the U.S. Open is a high compliment.

Comments
Topics mentioned in this article
Golf Graeme McDowell Tiger Woods Jim Furyk Tennis
Get the latest Cricket news, check out the India cricket schedule, Cricket live score . Like us on Facebook or follow us on Twitter for more sports updates. You can also download the NDTV Cricket app for Android or iOS.