Bill Haas got another big payoff on Tuesday when he was picked for the US team at the Presidents Cup. US captain Fred Couples used his two picks on Tuesday on Tiger Woods and Haas, who won a sudden-death playoff to claim the Tour Championship for his first win of the year. 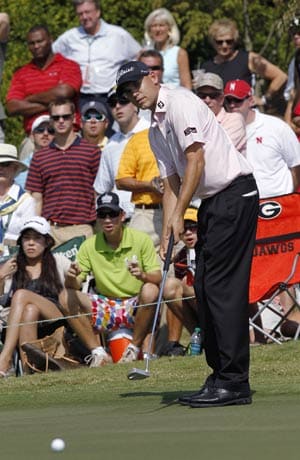 Bill Haas got another big payoff on Tuesday when he was picked for the US team at the Presidents Cup.

US captain Fred Couples used his two picks on Tuesday on Tiger Woods and Haas, who won a sudden-death playoff to claim the Tour Championship for his first win of the year.

Couples took Haas, the son of vice captain Jay Haas, over Keegan Bradley, whose two wins this year include the PGA Championship.

International captain Greg Norman took Robert Allenby and Aaron Baddeley, both of whom grew up in Melbourne.

He said Allenby was an "automatic pick" because of his longtime success at Royal Melbourne, while Baddeley made it an easier choice when he tied for third at the Tour Championship.

"Bill Haas knew he had to win last week, and he did it," Couples said. "I could not leave him off the team after that. When a guy knows that second place ... and he'll tell you, second place isn't good enough. And he understood that."

He said if Haas had lost the playoff at East Lake and Bradley had finished fourth or fifth - he wound up tied for 11th - then Bradley would have been the pick.

Couples said if Steve Stricker cannot play because of an injury, then Bradley would be chosen to replace him. Stricker had an MRI scan on Tuesday because of weakness in his left arm, although results were not immediately disclosed.

Woods was announced as a pick five weeks ago. Couples thought it was important to let the rest of the Americans know there would be only one open spot after qualifying ended.

Woods, who missed most of the summer with left leg injuries, did not return until August and played only two tournaments, missing the cut in the PGA Championship.

He is playing next week at the Frys.com Open, and will play in the Australian Open the week before the matches.

The Presidents Cup is Nov. 17-20 at Royal Melbourne.

"Things are going great," Woods said. "We're practicing very hard up at The Medalist, and I'm playing as much as I possibly can, something that I hadn't done all summer because I hadn't been cleared to do it.

"I'm really looking forward to getting my game rounded for The Presidents Cup."

Couples also considered Brandt Snedeker, who finished 11th in the US standings.

"Congrats to bill haas/(at)tigerwoods. They deserve the picks. Although I'm very disappointed, I've very happy to have been considered. GO USA," Bradley said on Twitter.

Bradley becomes the first American to win a major and be left off a team in the same year since British Open champion Todd Hamilton was not chosen for the 2004 Ryder Cup team.

For the Presidents Cup, Ben Curtis (British Open) and Shaun Micheel (PGA) were left off the 2003 team. That was their only win that year. Bradley, a 25-year-old rookie, also won the Byron Nelson Championship.

Couples said he spoke to Bradley for 45 minutes on the phone to explain his decision.

"I'm not one to say, 'Hey, you're going to be on plenty of team.' I wouldn't want to hear that," Couples said. "I know he's a young player. I laid it out on the line and told him for really three or four weeks now where everyone stood.

"I just felt like in this instance, Bill Haas has played two years, never been outside the top 12 position."

Haas has won three times over the past two years.

It will be the first team competition for Haas, Watney and Simpson.

Allenby and Baddeley give the International team - comprised of players from everywhere but the United States and Europe - five Australians for the matches at Royal Melbourne. It's the fifth time since the Presidents Cup began that the International side has had five Aussies.

Allenby missed the '98 matches at Royal Melbourne because he was just recovering from a near-fatal car accident and did not qualify.

It will be his sixth team, and by far the most important.

"Going down to Melbourne and playing at Royal Melbourne is probably one of the biggest highlights of my career," Allenby said.

Norman referred to him as an "automatic pick" because Allenby plays his best golf Down Under, one year winning the Australian Masters, Australian Open and the Australian PGA in the same year.

Baddeley was a more difficult choice, especially after John Senden of Australia was runner-up in the final qualifying event outside Chicago two weeks ago. Baddeley finished one shot out of the playoff at the Tour Championship, while Senden finished 25th.

"Knowing that we are playing in the backyard of Australian, I wanted to hopefully load up on the team with as many Aussies as I possibly could," Norman said.

He said he put Baddeley and Senden on notice going into the Tour Championship.

"Whoever played the best at the Tour Championship would obviously get the final nod," Norman said.

Norman took Baddeley over Senden, former British Open champion Louis Oosthuizen and Vijay Singh, who was the only player to have competed in all eight Presidents Cup matches.