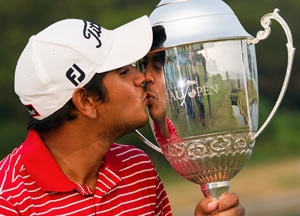 Indian star golfer Gaganjeet Bhullar is relishing his title defence at the Venetian Macau Open starting on Thursday, labeling the USD 800,000 event as one of the biggest on the Asian Tour.

Last year, Bhullar completed a commanding wire-to-wire triumph and called the victory as one of the best of his career which includes three other Asian Tour victories.

"Macau is one of my favourite courses in Asia. When I played in the practice round yesterday, it triggered memories from last year. I remembered what I did on the 72nd hole (which he birdied). It was one of those weeks which I'm not going to forget in my life," said Bhullar.

"This tournament is one of the biggest events on the Asian Tour. I'm feeling good and I'm striking the ball well. Just had a bit of ups and downs recently which is part of the game. I'm enjoying myself and I'm in a good frame of mind. Anything is possible."

Bhullar is hoping to play his way into a pairing with crowd-puller Els over the weekend.

"That's the goal. He inspires the next generation of Asian players to move onto the next level and make it big. With him around, he's the one to look out for," Bhullar said.

"This is my sixth visit to Macau and over the past four to five years, the course has been improving every year. Last year, the greens were running at about 10 on the stimpmeter and this week, it's running around 12 which is one of the fastest on the tour.

"This golf course and the event have matured a lot, not just from a commercial point of view but the potential point of view as well. There is a lot of sponsorship involved which is great. This tournament is one of the biggest on the Asian Tour," he said.

"Last year, it was a real battle of emotions, especially over the last few holes. After winning here, my outlook and ambitions changed. It gave me the push that I needed in my career. After that win, I'm feeling secure in my life. A lot of good things are happening and I'll try to win this tournament again this year," he said.

Comments
Topics mentioned in this article
Jyoti Randhawa Golf Arjun Atwal
Get the latest updates on ICC T20 Worldcup 2022 and CWG 2022 check out the Schedule, Live Score and Medals Tally. Like us on Facebook or follow us on Twitter for more sports updates. You can also download the NDTV Cricket app for Android or iOS.