India's second best performer in the tournament was Shiv Kapur, who added a 67 for a four-day total of five-under 275 to share the 24th position with his countryman S.S.P. Chawrasia (69). 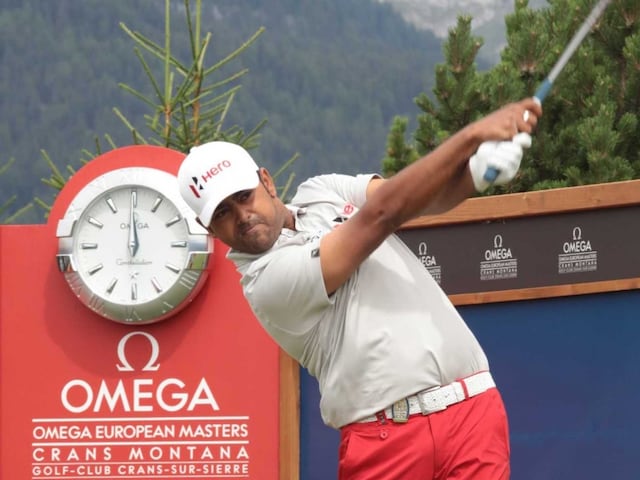 Indian golfer Anirban Lahiri fired six-under 64 in the fourth and final round to finish an impressive fifth while England's Danny Willett amassed a total of 17-under 263 to register a one-shot victory over compatriot Matthew Fitzpatrick in the 2.7 million euros European Masters here on Sunday.

Current Asian Tour Order of Merit leader Lahiri was on song on Sunday, carding seven birdies on the first, seventh, ninth, 10th, 14th, 15th and 18th holes against a lone bogey on the fifth to get a 64 at the Crans-sur-Sierre Golf Club.

The world No.61 took his total to 12-under 268 (67-67-70-64) -- five strokes off winner and joint overnight leader Willett, who scored 65. Joint overnight leader Fitzpatrick scored 66 in the final round of the only event on European soil to be jointly sanctioned by the Asian Tour and European Tour since 2009.

India's second best performer in the tournament was Shiv Kapur, who added a 67 for a four-day total of five-under 275 to share the 24th position with his countryman S.S.P. Chawrasia (69).

Jyoti Randhawa scored one-over 71 for a total of 277 after 72 holes as he finished tied 37th while Rashid Khan shot a poor round of 74. Rashid held a total of seven-over 287 to finish joint 68th.

Englishman Tyrrell Hatton made the best effort of the day with an eight-under 62 that made him a strong challenger to compatriots Willet and Fitzpatrick. Hatton finished third while Swedish Pelle Edberg, who scored 63 for a total of 266, finished ahead of Lahiri.

But Bengaluru-based Lahiri, who was joint 11th at the end of Saturday's play, was happy with Sunday's effort.

"It was a relief (to finish well) as I'm been playing well and I haven't been able to put a together a good round. It was a good feeling to play well on the back-nine as I had been struggling there the last few rounds. It's good to finish with a 64 as I did the exact same thing with a 64 last year too," the seven-time winner on the Asian Tour said in a release.

"The experience of being here many times showed especially on the greens. There were some tricky pins which I've seen before and having been here a few times, you now know where to hit it, how it's going to break and that made a massive difference," Lahiri, who is 14th in the European Order of Merit, added.

He said that after a good start to the year, he went through a series of average performances and this week's show gives him a feeling that his form is returning.

"I'm happy to start playing well again. I had a very good start to the year and played well in the beginning but I didn't play anywhere near my best after that," Lahiri, who February's Malaysia and Indian Opens, said.

"I feel like my form is coming back. It's an important time of the year and hopefully I can get this going."

Comments
Topics mentioned in this article
Anirban Lahiri Danny Willett Golf
Get the latest Cricket news, check out the India cricket schedule, Cricket live score . Like us on Facebook or follow us on Twitter for more sports updates. You can also download the NDTV Cricket app for Android or iOS.