The victory means Dustin Johnson has now won at least one tournament in each of the 13 seasons he has been on the PGA Tour. 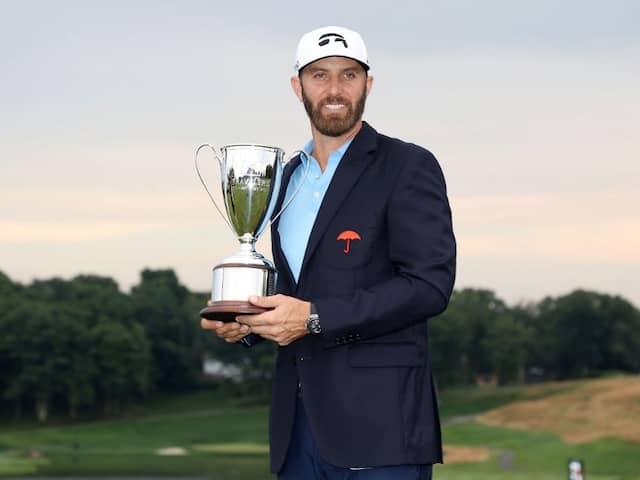 Dustin Johnson fired a three-under-par 67 to claim a one-shot victory at the Travelers Championship.© AFP

Dustin Johnson fired a three-under-par 67 to claim a one-shot victory at the Travelers Championship and keep his tournament win-streak alive on Sunday. Former world number one Johnson bagged his first tournament win since February 2019 after a closing three-under-par 67 at TPC River Highlands in Cromwell, Connecticut. Johnson, who started the day two shots adrift of third round leader Brendon Todd after a brilliant 61 on Saturday, held his nerve after a late wobble following a weather delay. The victory means Johnson has now won at least one tournament in each of the 13 seasons he has been on the PGA Tour, a feat matched only by an elite group of players that includes Jack Nicklaus, Arnold Palmer, Lee Trevino and Tiger Woods.

"Obviously it's a great streak and any time your mentioned with those names it's good," said Johnson, who finished on 19 under, one clear of Kevin Streelman.

"I'm proud of myself for continuing the streak, and I want to keep it going, but it was a long time between wins - hopefully it won't be as long until the next one.

Although the tournament was played without spectators because of the coronavirus, Johnson admitted he had been nervous after a weather delay with three holes remaining.

"Even though there's no fans, you still feel the pressure," Johnson said.

"The weather delay didn't help very much because I had time to start thinking...but I figured out a way to get it done."

The 36-year-old laid the foundations for victory with a run of three straight birdies either side of the turn to take sole possession of the lead as partner Todd struggled to make any birdies over the front nine.

After a bogey on the seventh which saw him relinquish a share of the lead, Johnson bounced back with a curling 27-foot birdie putt on the eighth to get back to 18 under.

He took the lead on the ninth after drilling a 126-yard second shot to within five feet of the pin before rolling in the simplest of birdie putts.

Johnson then pressed home his advantage on the 10th, stroking in another long birdie putt to go two shots clear.

Johnson looked to have taken an unassailable grip on the lead when Todd, who opened with 11 consecutive pars, then triple-bogeyed the 12th to fall out of contention.

But Johnson's serene progress came unstuck on the par-five 13th, when his drive off the tee drifted out of bounds down the left side of the fairway.

He limited the damage by digging out a bogey and then hit back on the 14th with his sixth birdie of the day, draining a 16ft putt to take a two-shot lead.

Johnson was forced to scramble again on the par-four 15th when his tee-shot flew down the left and only narrowly avoided the pond guarding the green.

Johnson was forced to roll his trousers up and wade into the water for his second shot. He chipped from the rough and missed the green but was able to get up-and-down for par.

By now the biggest threat to Johnson's chances of victory came from Streelman, playing in the group ahead.

Streelman's hopes of snatching victory however vanished as he was unable to pick up any birdies over the closing five holes, reeling off five straight pars to finish with a 67, for an 18-under-par 262.

A one-hour weather interruption as a storm approached halted play with three pairings left on the course, and when play resumed Johnson bogeyed the 16th to trim his lead to one shot.

But Streelman missed long birdie chances on 17 and 18, and after Johnson safely parred the 17th, he made par on the 18th to seal the win.

Will Gordon and Canada's Mackenzie Hughes shared third on 17 under while Kevin Na was a shot back after a closing 67.

Third round leader Todd meanwhile finished tied on 13 under with eight other players, including world number one Rory McIlroy, after a five-over-par 75.

Comments
Topics mentioned in this article
Dustin Johnson Golf
Get the latest updates on IPL 2020, check out the IPL Schedule for 2020 and Indian Premier League (IPL) Cricket live score . Like us on Facebook or follow us on Twitter for more sports updates. You can also download the NDTV Cricket app for Android or iOS.