Jimenez, who broke his leg just seven months ago, leads by one stroke from a star-studded chasing pack of Tiger Woods, Lee Westwood, Dustin Johnson and Henrik Stenson. 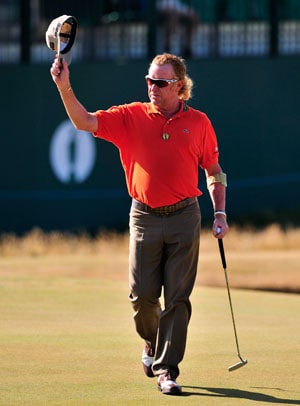 Spanish veteran Miguel Angel Jimenez leads the British Open by a stroke at the halfway stage, just seven months after breaking a leg in a skiing accident.

Many thought the leg break in December would spell the end of the colourful shot-maker's career, but he was back in action in April and is now in pole position to win his first major at the age of 49.

That would make him the oldest winner of a major in golf history, surpassing Julius Boros, who won the PGA Championship in 1968 at the age of 48.

"Been playing very well. Feeling solid and consistent on the golf course," said Jimenez, who stands at three-under, 139 for the two rounds.

"But the game at the moment is consistent in all parts. I made some recoveries. Only two birdies, made two bogeys

"As I said before, sometimes it's not about making too many birdies, it's about not to make bogeys. To play the golf course in this condition, that's one of the keys."

The target was set early in the afternoon when Woods joined Westwood and Stenson in a three-way tie for the clubhouse lead at two-under 140, defying the late starters to better them.

With the wind coming in off the Firth of Forth stiffening, and the bleached fairways and greens speeding up to scary levels, one by one, they fell by the wayside.

Overnight leader Zach Johnson had just the one bogey in his round of 66 on Thursday, but he had leaked four by the time he reached the eighth hole second time out.

Highly-fancied Brandt Snedeker was also going along well when the wheels came off down the back nine going bogey, bogey, triple bogey from the 13th, including a four-putt at the 15th.

Big-hitting American Dustin Johnson duelled with the lead on several occasions before he finally eased his way into the group waiting on two under 140.

Only Jimenez was able to stay out marginally ahead on what turned out to be a nerve-jangling late afternoon examination for the players in the Scottish sunshine.

There were rays of sunshine also for Scottish fans as Glasgow-born, but US-based Martin Laird put himself firmly into contention with a 71 to stand at one under 141 alongside Rafael Cabrera-Bello of Spain, American Zach Johnson and Angel Cabrera of Argentina.

Laird said he was aware of the groundswell of support from the home crowd, who last saw a Scot win The Open in 1999 when Paul Lawrie came back from 10 shots down in the final round to win at Carnoustie.

"I think it will help me more than hurt me. I probably have higher expectations for myself than everyone in the crowd," he said.

Last year's Masters champion Charl Schwartzel, who smashed a club in anger on Thursday, had the joint best round of the day with Westwood among the early starters, coming in with a superb 68 to move to one over.

At the start of the day 20 players were under par, but with the cut mark rising shot by shot, that number was down to nine by the end of the day with Ryan Moore the only player on level par.

The casualties were numerous and notable.

First and foremost struggling Rory McIlroy, who started the year as the game's new golden boy but who has fallen off that standard following what many see as an ill-advised change of golfing equipment.

Looking to throw off the shackles that are holding him down after an opening 79, McIlroy went for broke, but it was only more misery as he came in with a 75 to finish well down the field at 12 over.

English former world number one Luke Donald fared little better, adding a 72 to his opening 80 to trudge away from another failed Open for him at 10 over par.

And it was the exit door also for last month's US Open winner Justin Rose, who also ended up at 10 over after closing with a 77.

But defending champion Ernie Els made it through to the weekend after a 74 left him on six over, and the man he edged out at Lytham last year, Adam Scott, also kept his hopes very much alive with a 72 to stand at one over.

Phil Mickelson is also still in the mix at one over, but he too struggled on the greens, unusually four-putting at the par-three 16th.