Rory McIlroy who is chasing a third major after wins at the 2011 US Open and 2012 PGA Championship, looked less assured on the greens as he missed makeable putts that he was scoring with ease a day before. 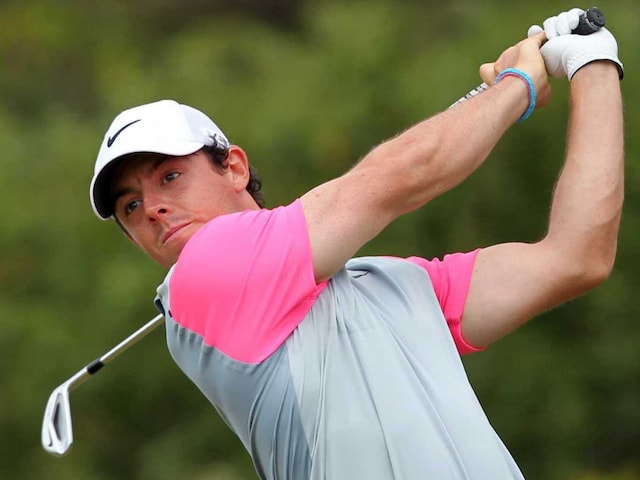 Northern Ireland's Rory McIlroy watches his shot from the 8th tee during his fourth round, on the final day of the 2014 British Open Golf Championship.© AFP
Hoylake:

Rory McIlroy had seen his overnight lead slashed to just two shots as he entered the back nine during an absorbing final round at the British Open on Sunday at Hoylake.

Spaniard Sergio Garcia nailed three front nine birdies and an eagle at 10 to pile the pressure on the Northern Irishman, who was trying to keep the lid on his round after an opening hole birdie was followed by back-to-back bogeys at five and six.

American Rickie Fowler was also within touching distance on 11 under, five back after beginning the day as McIlroy's closest pursuer.

McIlroy who is chasing a third major after wins at the 2011 US Open and 2012 PGA Championship, looked less assured on the greens as he missed makeable putts that he was scoring with ease on Saturday.

However a much needed birdie at the par three ninth from 12 feet eased the nerves of his army of fans following the 25-year-old, cheering him all the way around the par-72 Royal Liverpool layout.

Sweden's Robert Karlsson eagled the par five 10th to move alongside Fowler who was having a steady round with one birdie against no front nine bogeys.

Tiger Woods was on his way home after finishing his worst ever Open Championship on six over par and in 69th position.

Comments
Topics mentioned in this article
Rory McIlroy Sergio Garcia Golf
Get the latest Cricket news, check out the India cricket schedule, Cricket live score . Like us on Facebook or follow us on Twitter for more sports updates. You can also download the NDTV Cricket app for Android or iOS.