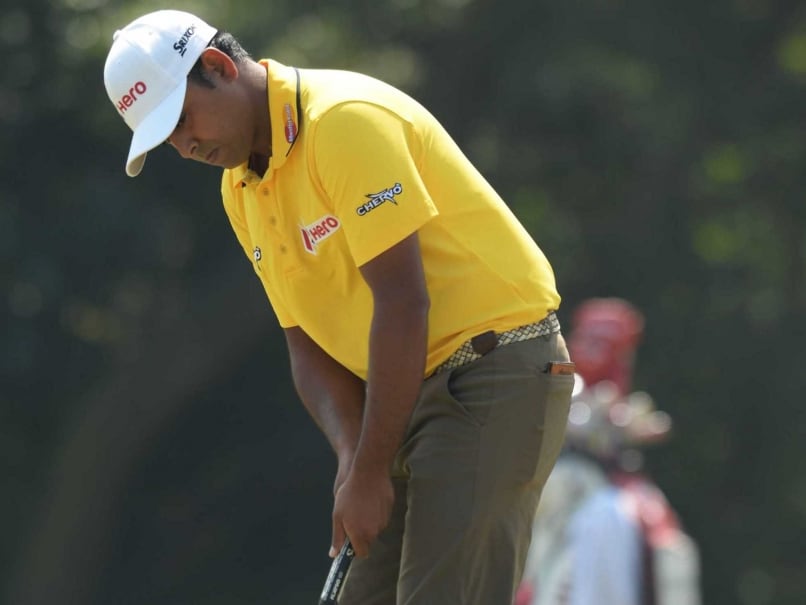 Anirban Lahiri carded a battling 68 to keep himself in contention to defend his Venetian Macao Open title even as he fell three shots behind leader Scott Hend (64) in Macao on Saturday. (Latest Golf News)

Hend and Lahiri will go into the final day's battle together just as last year. In 2013, Hend won and Lahiri was second and last year the positions were reversed.

While Hend moved to 15-under and Lahiri was 12-under, other Indians also had a decent day as Chiragh Kumar (69) was lying third at 11-under and Rashid Khan (68) was fourth at 10-under along with Australian Sam Brazel (69).

At seven-under were SSP Chawrasia (68), who had a double bogey on par-5 13th hole besides six birdies and another bogey, Rahil Gangjee (71), who had four birdies, two bogeys and a double on a testing day.

Gaganjeet Bhullar and Abhijeet Chadha, both shot even par 71 to be five-under in tied 22nd place. Jyoti Randhawa (71) was tied 48th at even par 213.

Hend soared on the wings of two eagles to shoot a seven-under-par 64 and opened up a three-shot lead. Winner in 2013, Hend eagled the par five second and 18th holes, the last with a lengthy 30-foot putt, at the Macau Golf and Country Club to set up a repeat of last year's final day shootout with world number 39 Lahiri.

Lahiri's struggles on the greens continued as he needed 30 strokes with his putter. He chipped in for eagle on eight and then picked up two more shots with tap-ins on 14 and 16.

"I'm glad I hit it to six inches on 14 and six inches on 16. That was the only way I could get the ball into the hole," said the 28-year-old Lahiri, a seven-time winner on the Asian Tour and looking for a third title for the year.

Chiragh, who was a teammate of Lahiri when India won a silver at Asian Games in 2006, has a best finish of second place in 2011, overcame a sore neck to return a 69 for third place, four shots off the pace in the USD 1 million Asian Tour tournament.

Rashid Khan will enter the last day five back following rounds of 68 and 69, respectively.

Last season, Lahiri overcame a two-shot deficit to beat Hend and the Indian said: "We had a great time last year. Two years back, he was way ahead and I almost chased him down. Last year I managed to chase him down. He's probably been waiting for this for a full year. I think we'll both be ready for it."

Lahiri, however, knows that his putter must start behaving. He endured a disappointing Presidents Cup debut last week where he also struggled on the greens.

"I've got five or six different putting gadgets out there (practice green) and I think I'm just going to put up a tent and live here tonight," said Lahiri.

Comments
Topics mentioned in this article
Golf Anirban Lahiri Scott Hend
Get the latest updates on Olympics 2020, Olympics 2020 Medal Tally, Live Cricket Score . Like us on Facebook or follow us on Twitter for more sports updates. You can also download the NDTV Cricket app for Android or iOS.