Australia's Aaron Baddeley came up just short of the playoff at the Tour Championship. Now he hopes that was good enough to earn a spot in the Presidents Cup. 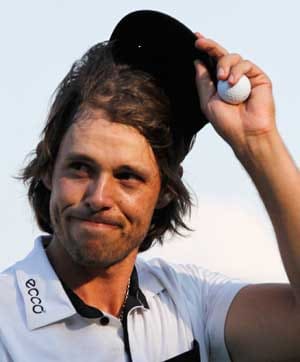 Australia's Aaron Baddeley came up just short of the playoff at the Tour Championship. Now he hopes that was good enough to earn a spot in the Presidents Cup.

Greg Norman, captain of the international team, will announce his two picks on Tuesday to fill out the 12-man squad.

"It's frustrating not to win because you're right there and you feel like you're playing well enough," Baddeley said. "At the same time, I definitely showed Greg that I did what I needed to do to come here and play well, and hopefully I'll get a positive phone call from Greg."

Baddeley came into the final round at East Lake on Sunday tied for the lead with Hunter Mahan, but a closing 72 left him at 7-under 273 - one stroke out of the playoff between Bill Haas and Mahan.

Baddeley has made a major jump in the world rankings - he was 56th coming into East Lake - and feels his game is back on track after a discouraging slump.

"The positive thing is I feel like it's only going to get better," he said. "It's close."

Comments
Topics mentioned in this article
Golf Australia Cricket Team Adam Scott Aaron Baddeley Bill Haas Geoff Ogilvy Tiger Woods
Get the latest updates on IPL 2021, check out the IPL 2021 Schedule and Indian Premier League Live Score . Like us on Facebook or follow us on Twitter for more sports updates. You can also download the NDTV Cricket app for Android or iOS.