Listen to the latest songs, only on JioSaavn.com
French Open 2011
Sports Home
Story ProgressBack to home

Good thing Wimbledon schedules its middle Sunday as a day off. This year, that gave everyone a chance to catch their breath after an eventful Week 1. Really, when action resumes Monday with all 16 men's and women's fourth-round matches, what could Week 2 possibly have in store to equal what the first six days offered? 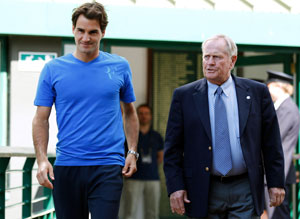 Good thing Wimbledon schedules its middle Sunday as a day off. This year, that gave everyone a chance to catch their breath after an eventful Week 1.

Really, when action resumes Monday with all 16 men's and women's fourth-round matches, what could Week 2 possibly have in store to equal what the first six days offered?

There was two-time champion Rafael Nadal's loss in the second round to an unknown guy ranked 100th - a guy who was beaten in his next match. A day after Nadal's exit, ending his streak of reaching five consecutive Grand Slam finals, Roger Federer, owner of six titles at the All England Club and a record 16 major trophies overall, dropped the first two sets of his third-round match ... before coming back to win.

There was five-time champion Venus Williams' departure on Day 1; the only other time in 16 appearances at Wimbledon that she lost in the first round came during her debut in 1997 at age 17. Her younger sister, four-time champion Serena, is still around, but only barely. She pounded a tournament-record 23 aces to escape the third round with a 9-7 third-set victory.

As superb as both of the Williams siblings are, neither has pulled off what Serena's next opponent managed to do Saturday: a perfect set. No woman had ever won all 24 points in a set in a professional match - and only one man had done it - until 65th-ranked Yaroslava Shvedova of Kazakhstan began that way against 10th-seeded Sara Errani of Italy, who was the runner-up at the French Open.

"Hopefully I'll be able to win a point in the set," Williams said, looking ahead and keeping a straight face. "That will be my first goal, and then I'll go from there." 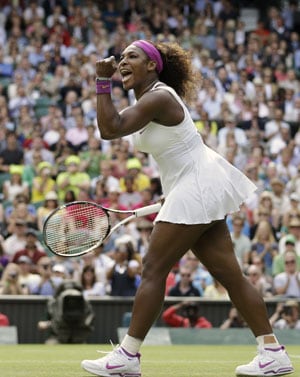 On and on and on it went last week.

American qualifier Brian Baker, who wasn't even ranked a year ago because he was forced off tour for more than half a decade by a series of operations, made it to the fourth round. So did 10th-seeded Mardy Fish, playing in his first tournament in about 21/2 months after being treated for an accelerated heartbeat.

Another U.S. man, three-time Wimbledon finalist Andy Roddick, wouldn't say whether he plans to be back after blowing a kiss to the Centre Court crowd after his third-round loss to No. 7-seeded David Ferrer. And yet another, Sam Querrey, lost a 17-15 fifth set to 16th-seeded Marin Cilic after 51/2 hours, the second-longest match in tournament history.

Errani was on the good side of another oddity, when she and her second-round opponent, CoCo Vandweghe of the U.S., were sent home at match point one evening because it was too dark to play. When they returned the next day, Vandeweghe double-faulted right away, allowing Errani to wrap up a victory after seven seconds of "action" - and not a single swing of her racket.

There was more, too.

The tournament seemed to become enamored of its retractable roof, pulling it shut over Centre Court so much that defending champion Novak Djokovic remarked: "I was a little bit surprised, when I saw sunshine, that the roof is closed. Obviously, they're relying on a forecast that I don't think is very reliable here."

Let's hope he's right about that last part, because the outlook calls for a 60 or 70 percent chance of rain Monday, Tuesday and Wednesday.

Even the last match of Week 1 had a bit of intrigue: Could Andy Murray - successor to Tim Henman as the Great British Hope - finish off 2006 Australian Open runner-up Marcos Baghdatis before Centre Court turned into a pumpkin? Tournament rules require play to be halted by 11 p.m., supposedly no matter what, but Murray got a two-minute extension so he could finish.

Now the focus of millions of local fans will get even more intense, the expectation being that the No. 4-seeded Murray, who has lost in the semifinals each of the last three years, should be the biggest beneficiary of Nadal's unexpectedly early exit from the bottom half of the draw. 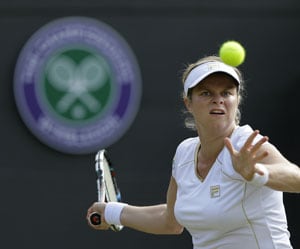 No matter what, that side will definitely produce a first-time Wimbledon finalist. Monday's matchups are Murray vs. Cilic, No. 5 Jo-Wilfried Tsonga vs. Fish, Baker vs. No. 27 Philipp Kohlschreiber, and Ferrer vs. No. 9 Juan Martin del Potro, the 2009 U.S. Open champion who is the only member of the eight-man group with a Grand Slam title on his resume.

On the top half, Djokovic - seeking to win his fifth title in the last seven majors - and Federer - aiming for a record-tying seventh Wimbledon championship - are on course for a semifinal showdown. The fourth-round pairings are Djokovic vs. Viktor Troicki, Federer vs. Xavier Malisse, No. 18 Richard Gasquet vs. No. 31 Florian Mayer, and No. 26 Mikhail Youznhy vs. Denis Istomin. Only Djokovic and Federer have won major championships; none of the other six has made so much as one Grand Slam final.

Wimbledon is the only Grand Slam tournament that takes a day off midway through. It's also the only one that schedules 16 matches on the second Monday.

In addition to Williams vs. Shvedova, the other matches in the bottom half of the women's draw are No. 2 Victoria Azarenka vs. No. 14 Ana Ivanovic, defending champion Petra Kvitova vs. No. 24 Francesca Schiavone, and No. 21 Roberta Vinci vs. Tamira Paszek.

On the top half, it's No. 1 Maria Sharapova vs. No. 15 Sabine Lisicki, No. 8 Angelique Kerber vs. four-time major champion Kim Clijsters in her last Wimbledon appearance, No. 3 Agnieszka Radwanska vs. 145th-ranked qualifier Camila Giorgi, and No. 17 Maria Kirilenko vs. No. 30 Peng Shuai.

"Everyone is playing everyone tough nowadays," Serena Williams said. "You can't underestimate anyone."