Second seed Kim Clijsters crashed out of the French Open on Thursday but insisted she had no regrets over her decision to return to Paris after a five-year absence and injury-plagued build-up. 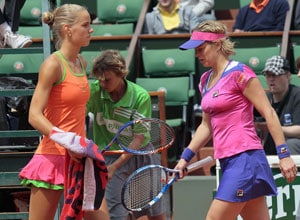 Second seed Kim Clijsters crashed out of the French Open on Thursday but insisted she had no regrets over her decision to return to Paris after a five-year absence and injury-plagued build-up.

Dutchwoman Arantxa Rus, the world number 114, sent the US and Australian Open champion spinning to her worst Grand Slam defeat in nine years by claiming a famous 3-6, 7-5, 6-1 second round win.

It was 27-year-old Clijsters' earliest Grand Slam exit since a loss at the same stage in 2002 with the Belgian star left to regret squandering a set and 5-2 lead as well as throwing away two match points.

But despite not having played a claycourt match in the run-up to Roland Garros, due to a shoulder problem and then a freak ankle injury suffered while dancing at a cousin's wedding, Clijsters said she was ready to compete.

"I'm happy that I gave myself an opportunity. It's better to try than not to try. If I had said: 'It's better not to come', that would be the attitude of a real loser," she said.

"I had practised well. Physically everything was fine. I was definitely ready."

Clijsters suffered an astonishing collapse on a windswept Philippe Chatrier Court, squandering two match points in the eighth and 10th games of the second set against an opponent who had never before got beyond the second round at a Grand Slam.

She committed a total of 65 unforced errors and 10 double faults before Rus unleashed a giant forehand to wrap up her biggest career win after two hours of action.

"The ankle is fine. It had nothing to do with it. I am still trying to find out what happened. I felt in control, she was missing a lot in the rallies and I was moving well," said Clijsters, whose three-year-old daughter Jada was watching from the crowd.

"Then I started doubting myself and that's the wrong attitude to have on clay. She built up more confidence and put me on the back foot."

The slender 1.80m Rus, who was named in honour of Spain's Arantxa Sanchez-Vicario, the triple Roland Garros champion, said: "It was my biggest win. She is my hero. I played fantastic tennis."

"I was a little nervous as it was my first time on the stadium. When I faced match points, I thought 'just go for it'. I was more aggressive in the second set."

There was no sign of the drama to come in the early stages as Clijsters, the runner-up in 2001 and 2003, took a 3-0 lead in both the first two sets before she allowed the wiry Dutch girl to claw her way back.

Clijsters, whose last appearance in Paris ended in a 2006 semi-final loss to compatriot Justine Henin, saw left-hander Rus recover from 2-5 down in the second set to level at 5-5 and then nip ahead with a break to lead 6-5.

Rus levelled the tie when Clijsters unleashed a wild forehand.

Clijsters won the opening game of the decider, but that was as good as it got for the Belgian as Rus swept the next six games in succession.

Rus will face either Russia's Maria Kirilenko or Chanelle Scheepers of South Africa for a place in the last 16.

She is the first Dutchwoman to make the third round of a Grand Slam since Michaella Kracijek at Wimbledon in 2007.

Clijsters' early defeat also means that Caroline Wozniacki will retain her world number one spot at the end of the French Open.