Francesca Schiavone's love affair with Roland Garros continued on Sunday as she dug deep to defeat Jelena Jankovic 6-3, 2-6, 6-4 to reach the quarter finals. 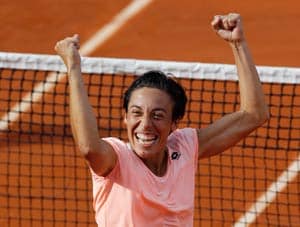 Francesca Schiavone's love affair with Roland Garros continued on Sunday as she dug deep to defeat Jelena Jankovic 6-3, 2-6, 6-4 to reach the quarter finals.

It was the little Italian's 11th straight win in Paris following her upset triumph here last year and she will next take on Russian Anastasia Pavlyuchenkova, who at 19 is 11 years her junior.

Also through to the last eight was Marion Bartoli who became the first French woman to reach the quarter-finals here since Mary Pierce was runner-up in 2005 when Gisela Dulko retired when 7-5, 1-0 down with an injury to her left thigh.

With the top two seeds, Caroline Wozniacki and Kim Clijsters already out of the tournament, the highest-ranking players left are fourth seed Victoria Azarenka of Belarus and Schiavone.

It was the first time in the Open era (since 1968) that none of the top three seeds reached the quarter-finals at Roland Garros.

"For sure it is interesting, but in women's tennis now it is really open with many players playing good," Schiavone said.

The Milanese former Fed Cup champion used all her clay-court craftmanship to counter former world number one Jankovic, who had much more power in her shot-making and depth to her serve.

Using plenty spin and tactical positioning, Schiavone ran away with the first set, but the Serb dominated the second.

The key moment in the decider came, after an early exchange of service breaks, in the ninth game with the scores level at 4-4.

Schiavone went on the offensive at the net to earn a break point which she converted when an under-pressure Jankovic hit long with a backhand.

She then served out for the match to extend her unbeaten run at Roland Garros, bending down to kiss the red dirt surface as she had done a year ago when she finally won a Grand Slam title at the ripe old age of 29.

For Russian teen Pavlyuchenkova, the win over Zvonareva represents a major breakthrough as it will be a first appearance for her in a Grand Slam quarter-final.

"It's my first Grand Slam quarter-final and it means a lot to me especially beating Vera. I knew it would be tough. She is very experienced and fights until the end," said Pavlyunchenkova.

"My dream is to win Roland Garros at least once."

Pavlyuchenkova, the youngest player left in the draw, went a break down early in the deciding set against her more seasoned compatriot.

But instead of brooding on it, she produced her best tennis of the match to level and after winning a marathon fifth game, she raced away to pull off an impressive win.

"She played a great match and has been very consistent. She is young and has great potential for the future," Zvonareva said of her opponent.

The Kuznetsova-Hantuchova tie started late out on Court 1 and, after a tight first set, it was the Slovak, who accounted for top seed Caroline Wozniacki in the previous round, who drew first blood.

She came back from 4-6 down with four points in a row to win a first set tie-break 8-6.

Kuznetsova dominated the second set to level then, with the light fading she edged ahead in the decider to keep alive her hopes of a third Grand Slam title at the age of 25.