Schiavone beats Lucic in straight sets at US Open

Seventh-seeded Francesca Schiavone needed just 53 minutes to advance to the third round of the US Open, beating Mirjana Lucic 6-1, 6-1 on Thursday. 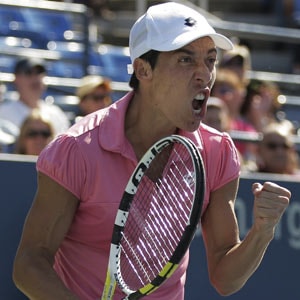 Seventh-seeded Francesca Schiavone needed just 53 minutes to advance to the third round of the US Open, beating Mirjana Lucic 6-1, 6-1 on Thursday.

The 2010 French Open champion had only one double-fault after committing 16 in her three-set first-round victory.

Schiavone did not face a break point and had only seven unforced errors, compared with 32 for Lucic.

The 96th-ranked player from Croatia, a former teen sensation, hasn't reached the third round at a Grand Slam tournament since 2001.

Schiavone will next face an unseeded opponent, Mona Barthel or Chanelle Scheepers.

Comments
Topics mentioned in this article
Tennis Caroline Wozniacki Mirjana Lucic-Baroni Leander Paes Shahar Peer Francesca Schiavone Maria Sharapova Sania Mirza US Open 2011 French Open 2011 Tiger Woods
Get the latest updates on IPL 2020, check out the IPL Schedule for 2020 and Indian Premier League (IPL) Cricket live score . Like us on Facebook or follow us on Twitter for more sports updates. You can also download the NDTV Cricket app for Android or iOS.