Schiavone and Li in one for the ages

Francesca Schiavone of Italy will defend her French Open title at Roland Garros on Saturday against China's Li Na in a tantalising clash of style between two veterans of the courts. 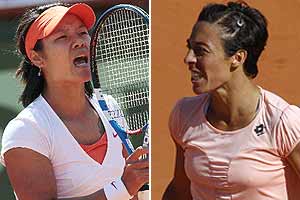 Francesca Schiavone of Italy will defend her French Open title at Roland Garros on Saturday against China's Li Na in a tantalising clash of style between two veterans of the courts.

The finalists are a combined 60 years, 79 days in age, making it the oldest women's Grand Slam final since Wimbledon in 1998, when Jana Novotna beat Nathalie Tauziat.

The Italian, three weeks shy of her 31st birthday, won through with another consummate display of claycourt tennis in defeating home hope Marion Bartoli 6-3, 6-3.

Li, who is 29 years and four months, came through with a 6-4, 7-5 win over Russian diva Maria Sharapova and she is, for the second time this year, just one win away from becoming the first player from China to win a Grand Slam title.

Schiavone, whose upset win here last year capped a 12-year-long career in which she, more often than not, grafted away in the shadows of the big names in the sport, played down the significance of the age barrier.

"The years can help a lot," she said.

"Some years ago the champions were always young players - Martina Hingis, the Williamses. Now this is changing.

"Like I said some days ago, it is like the wine. Stay in the bottle more is much, much better."

The Italian has played Li four times and the series is shared 2-2.

But it was Schiavone who won their last encounter which took place here last year when the little Italian won in straight sets in the third round en route to her first Grand Slam title.

Still, Schiavone is wary of a player who has suddenly become a convert to claycourt tennis after years of struggling on the slippery, dusty surface.

"I think she's played some of the best tennis in her career in Australia," she said referring to Li's run into the final in Melbourne where she lost to Kim Clijsters.

"She's pushing strong physically, mentally. She is not anymore so much down, but she keeps going at a high level.

"We are not similar in playing. I play kicker, slice, and topspin. She plays much more with power.

For Li the final will have an added burden of responsibility as for the second time in a few months she stands just one win away from an historic achievement in becoming the first Chinese player to win a Grand Slam title.

She believes she will be all the better placed this time for the experience she gained Down Under.

"Melbourne was my first time in a final ... didn't have any experience before," she said.

"But this time it is my second time in the final. Now of course I know what you should do. I know it's a different surface, but you play six matches already.

"So, yeah, this time I know what I should do in the final."

It will be a fascinating contrast in styles, not unlike last year's championship match when the underdog Schiavone used all her tactical skills, variety of shot and determination to defeat a bigger and more powerful opponent in Stosur.

For beaten semi-finalist Bartoli those could once again be the key ingredients for the Italian to become the first player 30 or over to win a Grand Slam title since Martina Navratilova's 1990 Wimbledon triumph.

"Francesca feels really good here. She's very comfortable on that type of clay," she said after losing to her.

"That clay really makes her spin very disturbing, so her game can really bother Li Na because she likes instead when the opponent plays flat.

"Also, Francesca won here once, where Li Na didn't win here yet, and she has less experience.

"So that might give an advantage to Francesca. I'm sure the match will be tight, but I think maybe Francesca is a favorite."