The red clay courts of the Italian Open "seem like paradise" to Novak Djokovic after a week on the experimental blue surface in Madrid. 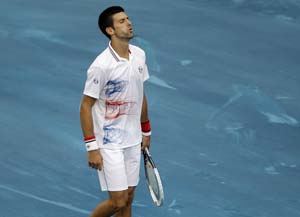 The red clay courts of the Italian Open "seem like paradise" to Novak Djokovic after a week on the experimental blue surface in Madrid.

The top-ranked Djokovic was one of several top players who were highly critical of the blue clay tested at the Madrid Open, especially after he lost to fellow Serb Janko Tipsarevic in the quarterfinals.

"It feels great," Djokovic said on Sunday. "After that blue clay, this clay seems like paradise."

"The most basic thing you have in our sport - the most important - is the movement," Djokovic said. "If you cannot be in balance for the ball, and to hit the ball, then everything becomes twice as difficult. That's the biggest difference. Here you can actually be on the ball and slide well, whereas there you were slipping and falling down."

Rome is the last major warmup before the French Open begins in two weeks, and winning Roland Garros is a "top priority" for Djokovic after winning every other Grand Slam beside Paris last year.

But in addition to dealing with the blue clay, Djokovic also had to play while mourning the death of his grandfather in Monte Carlo a few weeks ago, losing a lopsided final to Rafael Nadal.

"I don't think my preparation for Roland Garros has been disturbed in any way, because I feel like I've practiced very hard the last five weeks," Djokovic said. "Right now I'm just thinking about Rome."

Fourth-ranked Andy Murray is feeling healthy again after skipping Madrid due to a back injury.

"I'm pretty good," he said. "I've taken 10 days off from Barcelona and I got here on Tuesday evening, so I've been practicing."

While Murray didn't do it on purpose, avoiding the blue clay could turn out to be an advantage.

"It was my decision to stop. People have been saying that I was much smarter than they were," Murray said. "Obviously the conditions there were not ideal and with the French Open just a couple of weeks away, I'm not going to have to make adjustments which I would have had to do from Madrid."

The women's tournament begins Monday, with defending champion Maria Sharapova looking to bounce back from a quarterfinal loss to Serena Williams in the Madrid quarterfinals.

Having struggled on clay at the beginning of her career, Sharapova cited improved fitness as the reasons for her recent success.

"I only play three or four tournaments a year on clay and you need to be physically ready," she said. "You often have five days in a row with three-hour matches, and so I have improved on recovering effectively and this has given me confidence."

Last year's French Open winner Li Na of China has had a slower start to her clay season, losing in the quarterfinals in both Stuttgart and Madrid. But she's finally adapted to her newfound superstar status in China.

"Before, even if I won the tournament after I could do whatever I wanted," she said. "But after I won (Roland Garros), wherever I go people are like 'Ah, this is Li Na.' I really didn't know what I should do."

Li lost in the second round of Wimbledon last year, then was stunned by Romanian teenager Simona Halep in the first round of the U.S. Open. She opened this year by reaching the fourth round of the Australian Open.

"The worst time for me was last year, because after the French I had to do many things (off) the tennis court," she said. "I was losing concentration on the court. There was so many things coming into my life that I had never experienced before. (From) the beginning this year, I know - I'm still a tennis player, tennis is my job."

Comments
Topics mentioned in this article
Novak Djokovic Andy Murray Svetlana Kuznetsova Janko Tipsarevic French Open 2011 Tennis Real Madrid
Get the latest updates on IPL 2020, check out the IPL Schedule for 2020 and Indian Premier League (IPL) Cricket live score . Like us on Facebook or follow us on Twitter for more sports updates. You can also download the NDTV Cricket app for Android or iOS.