Listen to the latest songs, only on JioSaavn.com
French Open 2011
Sports Home
Story ProgressBack to home 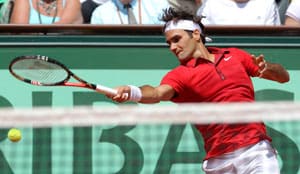 The third seed has reached the last eight without dropping a set as he continues to thrive at a Roland Garros tournament where the world's top two, Rafael Nadal and Novak Djokovic, are expected to reach the final.

"I am super-happy because I knew after Stan beat (Jo-Wilfried) Tsonga, when he really dominated in the last two sets, what the danger was," said Federer.

"He showed all his qualities in the third set and was a bit unlucky but all the better for me I guess."

With victory on Sunday, in a repeat of the match-up at the same stage of Roland Garros last year, Federer took his career record to 9-1 against Wawrinka, his Beijing Olympics doubles gold medal-winning partner.

Next up for the Swiss is either Spain's David Ferrer or Gael Monfils of France for a place in the semi-finals.

Federer cruised to a two-set lead over Wawrinka courtesy of a break in the fourth game of the opener and two breaks in the third and fifth games of the second set.

Wawrinka, with Federer's former coach Peter Lundgren in his corner, rallied to lead 3-0 with a break in the third set.

But 16-time Grand Slam winner Federer came roaring back in the seventh and 11th games before securing victory with his eighth ace.

While it was business as usual for Federer, world number 49 Fognini became the first Italian man in 16 years to reach the quarter-finals when he saved five match points and battled crippling cramps to defeat Albert Montanes.

The 24-year-old Fognini had been 4-1 down in the final set, then controversially called for treatment for cramping in his left thigh when he was two points from defeat in the 14th game of the decider

Fognini, the first Italian man in the last eight in Paris since Renzo Furlan in 1995, will now face either second seed Novak Djokovic or French 13th seed Richard Gasquet for a semi-final place.

But 24-year-old Fognini, who was virtually rooted to the spot as his injury took hold, admitted that he may not be able to make his quarter-final date.

"I am in a lot of pain. It's not cramp, I felt the muscle stretch," said Fognini, who committed 103 unforced errors in the match.

"I have 48 hours to recover. I don't know about the next match. I will go and see the doctor and then see what happens."