Leander Paes had the consolation of reaching the qaurterfinals of mixed doubles as he and Iveta Benesova of Czech Republic defeated the duo of Chia-Jung Chuang of Chinese Taipei and Marcin Matkowsk of Poland 6-4 7-6 in second round. 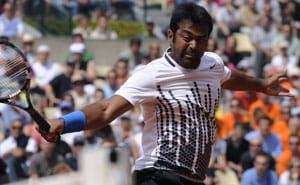 Leander Paes had the consolation of reaching the qaurterfinals of mixed doubles as he and Iveta Benesova of Czech Republic defeated the duo of Chia-Jung Chuang of Chinese Taipei and Marcin Matkowsk of Poland 6-4 7-6 in second round.

Paes and Benesova had to toil hard during their mixed doubles victory, which lasted an hour and 16 minutes. While the first set was over in just 27 minutes, the seventh seed Indo-Czech pair had to sweat it out in the second set before prevailing 7-6 (1). In the quarterfinals, Paes and Benesova will face the winner of the match between Slovenia's Katarina Srebotnik and Nenad Zimonjic of Serbia and Virginie Razzano of France and Dick Norman of Belgium.

Paes along with Mahesh Bhupathi had earlier in the day made a shock second round exit from the French Open men's doubles competition with a straight set defeat against unseeded Australian combination of Stephen Huss and Ashley Fisher. The third seed Indian pair, who were the runners-up at Australian Open this year, lost 6-7 (7) 4-6 in a one hour and 32-minute contest at Roland Garros.

Paes and Bhupathi failed to recreate their magic in the men's doubles today though the match was closely fought. Incidentally, the experienced Indian duo had won their last Grand Slam title at this very venue in 2001. After that, they had split and played with different partners. They decided to join forces just ahead of the season and began the re-union by winning the Chennai Open and and then reaching the Australian Open final. There was only one breakpoint in the whole match, which Fisher and Huss converted in second set to move to the third round.

Comments
Topics mentioned in this article
Iveta Benesova Novak Djokovic Venus Williams Leander Paes Andy Murray Juan Martin del Potro Tennis French Open 2011 French Open 2011
Get the latest updates on IPL 2020, check out the IPL Schedule for 2020 and Indian Premier League (IPL) Cricket live score . Like us on Facebook or follow us on Twitter for more sports updates. You can also download the NDTV Cricket app for Android or iOS.